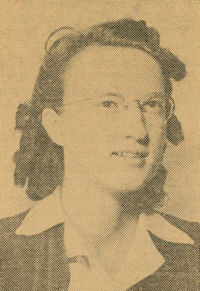 – age 17, is the daughter of Mr. and Mrs. J. F. Woodall. She was born in Perry and has attended the Perry schools.

She served as president of her home room and was a member of the band for three years. She has been very much interested in physical education activities for girls.

Wilda has been outstanding in her art work for the past six years. She designed the programs for the junior and senior class plays and the spring concert.

Hobbies are sports of all kinds and photography.

She plans to enter an art institute next year to study art.

Born June 29, 1923, she was the daughter of James Francis and Frances Sarah (Davis) Woodall. After graduating from Perry high school in 1941, she continued her education at Oklahoma City University. During her college years she was active in the College Art League, where she served as vice-president, and a member of Alpha Omega sorority. She also excelled scholastically.

Her parents and brother, Albert Leroy Woodall, predeceased her.

Her cremains are entombed at Resthaven Gardens Cemetery in Oklahoma City, OK.