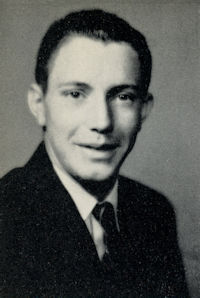 Funeral will be at 2 p.m. Tuesday for Gary Byard Anderson, 34, Tahlequah, formerly of Perry, who died early Friday as a result of injuries received in an automobile accident near Livingston, Texas. Services will be conducted in the chapel of the Reed-Culver Funeral home at 117 West Delaware street, Tahlequah. Rev. Tom Kirby, Tahlequah, former pastor of the United Methodist church of Perry, will officiate. Burial will be at the Ross cemetery at Park Hill, near Tahlequah.

Born September 8, 1944, in New Orleans, Louisiana, he was the son of C. Byard and Luada Jo (Brengle) Anderson. After graduating from Perry high school in 1962 he served in the Navy.

He worked as a sales representative for Hurst Boats.

Anderson is survived by his wife, Sue, and a daughter, Cheryl, both of the home address, 405 East South street, Tahlequah; his father and step-mother, Mr. and Mrs. Byard Anderson, Gore, formerly of Perry; and two uncles.

His mother preceded him in death.