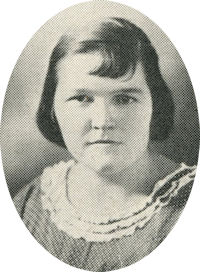 “Simplicity of character is the natural result of profound thought.”

Mrs. Tate was born at Billings, July 8, 1904. She was the daughter of Neils and Libbie Christiansen. She moved with her family to the Perry community when she was three and one-half years old.

After her graduation from Perry high school in 1924, she and Edgar Tate were married in September, 1926. Mrs. Tate was a member of Christ Lutheran church.

Survivors include one daughter, Lillie May Stevens, Perry; a grandson and granddaughter, Billy Ray and Linda Stevens, Perry; three great-grandchildren, Laurie, Carrie and Justin Stevens, all of Perry; and one sister, Gladys Porter, Pawnee.