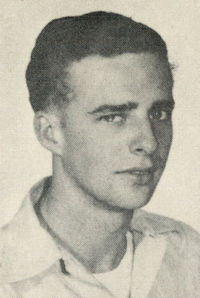 William Mose Armour, 72, a native of Perry, OK and a resident of Auburn, WA passed away on January 23, 1999, in the home that he built and was proud to reside in.

He was raised in Perry, OK. At age 17 he felt the patriotic call to serve his country in the U.S. Navy for two years and a day. He participated in the Pacific Theatre Campaign of WWII where he was a boat coxswain and made three invasions carrying troops ashore to Guam, Okinawa, and Layette of the Philippines. After the war he returned to Perry, OK where his first priority was to complete his education. He returned to the sea as a Merchant Marine for 14 more years where he worked with the natives of Alaska, resupplied the American troops defending the Pusan perimeter of South Korea. He ferried refuges from north Vietnam to south Vietnam during the French occupation for the U. S. Government. He was proud to say that he sailed around the world twice. During his travels he met and married his life long companion Miss Jette M. R. Hansen in Norrsundby, Denmark. He returned to Seattle, WA where he settled his family and found employment as a fire fighter for the Boeing Co. and the General Service Administration where he completed 20 years of government service. He then felt the desire to work near the water as a ILWU Longshoreman. He was proud to have worked 26 years as a Union Laborer with Local 19 of Seattle from where he retired at age 66. He was also a member of the Veterans of Foreign Wars and American Legion. He enjoyed coming back to Perry visiting with his friends and relatives.

He will be greatly missed by all but never forgotten. He was proud to be an American.

Memorial services will be at 3:30 p.m. Saturday, Jan. 30, at the Chapel of Yann Funeral Home in Auburn, WA.