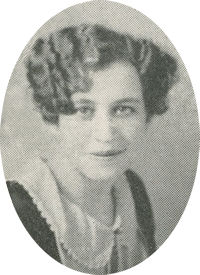 “I wanted to end it all — When I was in the air half-way down, traveling like a bullet, I changed my mind.”

Mrs. Hoggatt was born March 11, 1908, in Chelsea, OK the last of five sons and daughters of W. C. and Evelyn (Roselle) Marshall. She was a graduate of Perry High School. She was married to art Syverson who died in 1961, then was married to Kelly Hoggatt.

In addition to being a nurse for 40 years, she owned and operated three businesses.

Mrs. Hoggatt traveled extensively. Later in life, she returned to Perry with her husband, Kelly. Family members said, “She leaves her family with many warm and living memories. She instilled strength and pride in her grandchildren, who, in her eyes, were everything.”

She was preceded in death by her first husband; three brothers, Archie Marshall, Harry Marshall, and Frank Marshall; and one sister, Kitty Foster.

Graveside services will be held at 10 a.m. Tuesday, Sept. 6, 1999, at Grace Hill Cemetery under the direction of Brown-Sisson Funeral Home. Rev. Steve Smith will officiate.