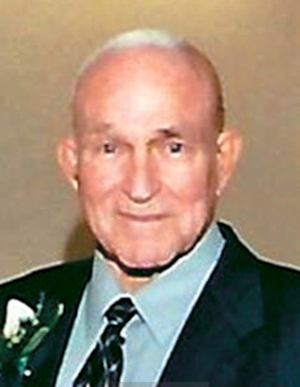 – plans to follow in the footsteps of his two brothers who are in the armed services by joining the army after graduation. John is the son of Mr. and Mrs. H. M. St. Clair, 1128 Jackson street, and has taken all his schooling in the Perry public schools. He was born in Springdale, Ark., and is now 17 years old, moving to Perry when two.

He served in the Student Council since the eighth grade, being president this year. He was president of his homeroom, associate editor of the Perryscope during his junior year and was in the cast of both his junior and senior class plays.

St. Clair grew up during dust bowl and great depression, one of five boys who were raised with strong work ethic. Each son was charged a chore in the household; laundry, gardening, etc. John’s strong work ethic helped him to excel in both academics and sports. He was President of the Honor Society and President of the 1943 Perry High School class. He was also captain of both football and wrestling and an All-State football player and a two-time State Champion wrestler. He was Perry’s first and second State Champion wrestler. As a result, he was offered a football scholarship from Oklahoma University and a wrestling scholarship from Oklahoma State University. However, John was drafted into WW II, immediately following graduation.

He entered the Army Air Force and became a bombardier. He served almost three years in the European theater, flying 13 missions before the war ended and then remained in Europe during the Occupation. He attended the Nuremberg war trials. He attained the rank of Captain upon returning home. He received numerous medals and honors while serving in WW II.

Right before he left for Europe, he married his high school sweetheart, Rose Mary Shappell. Upon his return, OSU honored his Wrestling Scholarship and he studied Engineering there for three years. As his family grew, he left OSU and became a state game warden for the next fifteen years. Again, as the family grew, he started his own plumbing business to support the family. By 1965, his plumbing business became his full-time occupation and he opened his business in downtown Perry. He continued to grow his business by adding electrical and heat/air. He was in business downtown for 40 years.
At the end of this career, he became the manager of his daughters’ liquor store and worked until he fully retired in 2010. He only retired due to his health.

His children and grandchildren were the love of his life, including his wife, Rosie. John’s children want him to be remembered as a humble, Christian man.

John was preceded in death by his wife Rosie in 2009; parents; and four brothers, Jack, Don, Hugh, and Tolbert.