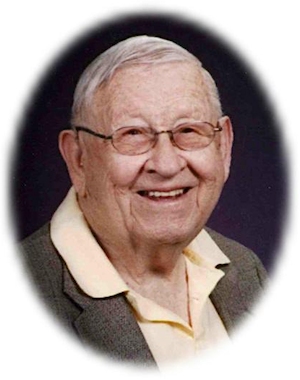 Glenn Yahn, also known as Mr. OSU, was born April 26, 1910, and probably was dressed in an orange diaper after his delivery.

Glenn attended Perry schools and graduated with the PHS class of 1928. In 1932, he graduated from Oklahoma A&M College.

In 1936 he married Eleanor Thornton from Pawnee.

Glenn is one of the most active persons in the Perry area and has been for many, many years. He was the Chamber of Commerce Citizen of the Year in 2005. Over the years, he led many organizations, serving as president of the Oklahoma Lumbermen’s Association, OSU Alumni Association, Perry Rotary Club, and Cherokee Strip Historical Society. He was a board member of the State Board of Education and the State Board of Vocational and Technical Education.

During World War II, he served with the U.S. Army and Air Corps in the Philippines. He was a member of the Veterans of Foreign Wars and American Legion for 55 years.

He retired in 1993 from active service in the Donaldson & Yahn Lumber Company after 61 years of service there.