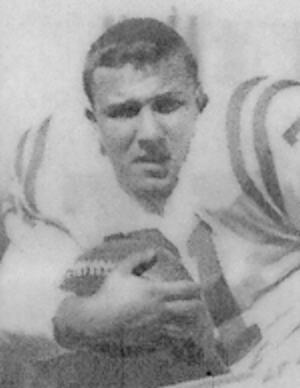 The youngest of 14 children, Billy Pricer was born in Perry to John and Cora Pricer. He graduated from PHS in 1953. While at PHS, Billy was Student Council president and lettered all four years in football, wrestling, and baseball. He was a state champion wrestler in 1951 and 1952.

Billy attended the University of Oklahoma on a football scholarship, but also went out for the wrestling team. The OU wrestling coach wanted Billy to wrestle at a light weight, but Coach Bud Wilkinson wanted him to bulk up to 200 pounds and play fullback and linebacker. These were the years that players played both offense and defense.

Billy wound up playing for Wilkinson as a punter, running kickoff returns, and extra point kicker. He played in back-to-back national championships for OU in 1955 and 1956. While at OU, Billy never played in a losing game.

He was drafted #6 by the Baltimore Colts in the 1956 draft. While with the Colts, he played fullback. The team won the World Championship (then the equivalent of today’s Super Bowl) in 1958 and 1959.

Billy and wife Sally Jo were parents of two children, Terri Nance and Rod Pricer, both of whom live in Oklahoma City. Following his retirement from the Colts, Billy made his home in Oklahoma City and pursued a career in manufacturing and sales.

Billy passed from this life in September 1999.