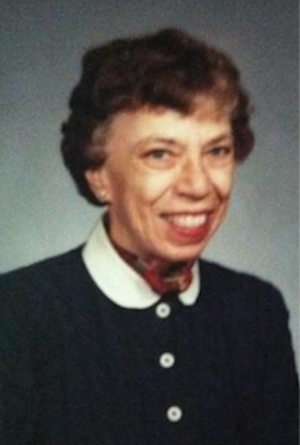 Elizabeth Willems was destined to always relish the taste of new things and to always be at the forefront.

Elizabeth attributes the excellence of her education to her small stature, which placed her on the front row of every class. She says that “…it wasn’t that I was smart, but I had nowhere else to look except at the teacher.”

She was born in 1918, the year of the great flu pandemic. After graduation from PHS, she attended Park College in Parkville, MO, where she graduated in 1940 with a BA in English Literature.

At Park, Elizabeth was editor of the school paper. After graduation from Park, she attended graduate school at Washington University in St. Louis. Shortly, she was called back to Park to serve as the college registrar.

She served her country as a WAVE in the shipyards of Baltimore, returning to Perry after the war.

While visiting Norman, she ended up applying and being accepted to the English graduate program at the University of Oklahoma.

Shortly thereafter, she met a young man from Holland, Kees Willems, who was doing graduate work at Harvard. They married in 1953 and traveled extensively in Europe. Elizabeth loved living in Holland for the next 20 years, learning the language, becoming part of the Willems family, and editing and translating art books for Abrams Publishing Company of New York in their Dutch offices in Amsterdam. She translated and edited books and papers on Rembrandt from Dutch to English.

Today, she is an accomplished poet and frequently enlightens her church members with her poetry.