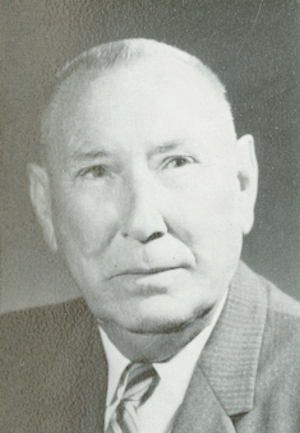 Hump Daniels was arguably the best football coach in Perry High School history. His teams regularly defeated much larger schools such as Stillwater, Ponca City, Enid, Del City, and Guthrie. During practices, it was common to see him walking around observing and using his ever-present 2 x 4 to “persuade” the player to work harder.

As a teacher, his courses were Problems of American Democracy and Driver’s Education. His Driver’s Ed students remembered him for his habit of clinking coins in his pocket during driving lessons.

Hump was born in 1900 in Stillwater and moved from Yale, Oklahoma, to become the PHS football coach in 1931. He coached at PHS for some 30 years and then continued teaching until his retirement in 1966. He passed away in 1971 after shoveling snow at his house.

The PHS football field, Daniels Field, is named in his honor.