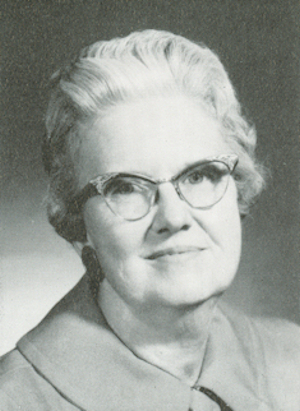 Ruth Taber taught in Oklahoma schools for 40 years, including 27 years at PHS. She was born in rural Kay County and graduated from Blackwell High School in 1928. She taught at New Hope school in Noble County in 1929-30, Sumpter school in Kay County in 1931-33, District 75 in Kay County in 1935-41, and another Kay County rural school in 1941-42. She received her bachelor’s degree in education from Central State College in 1942. In that year, the Perry school system hired her as an English teacher. She eventually taught Speech, Drama, History, and English and then became the PHS guidance counselor, a role she held for many years. Many students remember her for guidance in applying for college admission. She also was the longtime faculty advisor for the yearbook, The Maroon Spotlight.

The 1959 PHS yearbook was dedicated to her with this inscription: Service is exemplified in many ways. As much from what (poet James Russell) Lowell called “the little kindnesses, which most despise, or leave undone” as the undertaking of glorious enterprises. To Miss Ruth Taber, whose service–to this community, school and the students thereof–will forever be remembered and appreciated, we, the 1959 Annual Staff proudly dedicate the Maroon Spotlight.

She was active for many years in the Business and Professional Women’s Club, serving as president in 1946-47.

Ruth passed away in May 1970 after a brief illness. She had reported to work at PHS that day but felt ill and went home in the morning and died at midday the same day. PHS classes were canceled for the rest of the day. She was laid to rest in a Tonkawa cemetery.