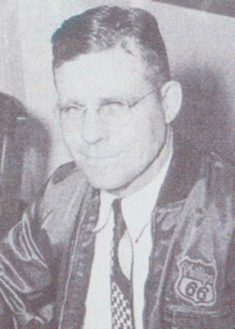 After overcoming a very serious childhood accident, Jack went on to become one of the highest achieving wrestlers in PHS history. Jack was undefeated in two years of high school wrestling (1926 – 27). He attended Oklahoma A & M College (now OSU) going undefeated in four years on the varsity squad. He won NCAA championships in 1929, ’30, and ’31, going on and winning AAU championships in 1929, ’30, ’31, and ’32. All that was followed by a Gold Medal in the 1932 Olympics held at Los Angeles. He is among the first group elected to the National Wrestling Hall of Fame in 1962.

An amazing story about Jack is that he had to run some miles to his gold-medal match at the Los Angeles Olympics because of a communication error about a time change for the match. And, of course, he won the match anyway. Jack graduated from A&M in 1933. He served in the U.S. Army in the Pacific during World War II. He later worked at Phillips Petroleum Co. for 35 years. Besides the National Wrestling Hall of Fame, he was named to the Jim Thorpe Hall of Fame and the Helms Hall of Fame.

After his retirement from Phillips Petroleum, he and wife Julia returned to Perry. Jack passed away in 1986 following a period of failing health.