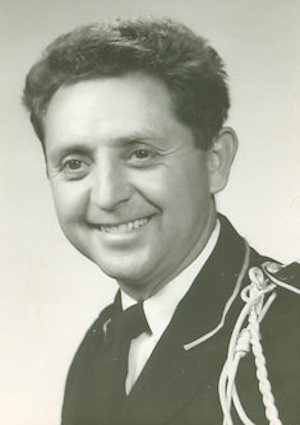 Ashley was born in Nebraska in 1912 and moved with his parents to the Perry area when he was two. By age five, he was walking two hours from home to take piano lessons—paid for with eggs. At 16, he was in a band directed by Professor Leopold Radgowsky, playing a mail-order trombone.

He attended Northern Oklahoma College and finished his education at Central State University in Edmond.

Ashley began his teaching career at Willow Creek School near Perry. He moved to Billings, then to Marshall.

He organized bands in Crescent, Hennessey, Douglas and Covington. During World War II he was teaching at Shidler/Webb City where he built a band that toured during the summer vacations.

He organized the Pawnee Parade that continues to this day. In 1957, he started his 20 years of service as Director of Student Entertainers at OSU. His groups entertained throughout the nation and abroad with USO tours.

Ashley played the piano, accordion, xylophone, vibraphone, marimba, and other instruments. After his retirement from OSU, he and his wife, Beverly, and son performed for community organizations and at nursing homes for many years.