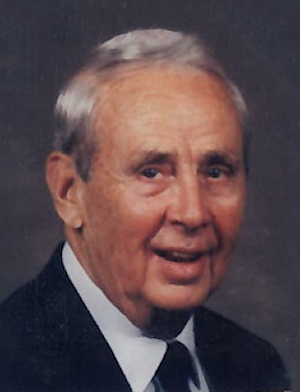 Kenneth was born in Red Rock, OK, the son of Dr. Daniel and Daisy Coldiron. He attended Red Rock schools through the second grade until his parents moved to Perry in 1918. He completed grade school, junior high and high school in Perry, graduating in 1929. While a student at PHS, Kenneth competed on the school wrestling team and carried a love for the sport throughout his life.

Kenneth graduated from Oklahoma A & M College in 1935 with a degree in business administration. During the summers of his college years, he appeared with Cap Swift’s “Zouaves” drill team on the 101 Ranch Wild West Show. After graduation from Oklahoma A & M, he went to work for the Lower Auditing Company, headquartered in Cincinnati, OH. During his work with the company, he traveled and worked in many cities in the U.S.

He enlisted in the U.S. Army in 1942 and transferred to the Army Air Corps in 1943. He served in the European theater of operations until 1945, when he was discharged as a Second Lieutenant.

In 1947, Kenneth went to work for the Exchange Bank. During his lengthy career there, he served as cashier, vice president, president, and chairman of the board. He retired from full-time duty on April 7, 1980, but continued to serve on the board of directors until his death in 1998.

Kenneth was married to Mary Ellen (Dunivan) Coldiron and was the father of four sons, Clark, Dan, Reed, and Carl, who is deceased. Kenneth was a faithful member of the First Presbyterian Church here in Perry where he served as trustee and elder.