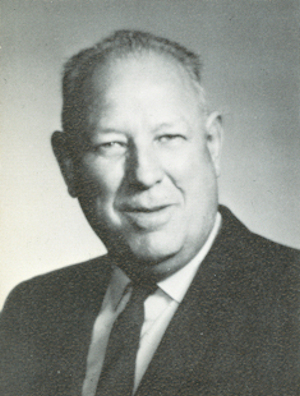 Coach Divine spent his entire life promoting Perry. John was the second of nine children. While in his teens, the family moved to a farm northwest of Perry.

John attended Rose Hill School, where he later taught. Coach Divine attended Oklahoma A&M (now OSU). While at A&M, he was recruited for wrestling by the fabled Ed Gallagher.

John placed second in the 1931 nationals. Coach Divine taught three generations of many Perry families. He assisted hundreds of students to go to college by finding scholarships or finding them jobs that would support their studies.

Coach Divine’s teams had a dual match record of 241-87-5. John coached 26 individual state champions and three national champions. His teams took state team titles in 1951, 1953, and 1961. Thirty-five of his wrestlers went on to become coaches, and at least four of them coached at PHS. John served as a wrestling official for more than 30 years, participating at the college, high school, and junior high levels, including NCAA tournaments. He served as president of the Oklahoma High School Wrestling Association and on the Oklahoma board of control and the national rules committee. He was the first high school wrestling coach to be inducted into the Oklahoma High School Coaches Hall of Fame and was the recipient of an Edward Clark Gallagher Award in 1991.

After retiring from teaching/coaching, he was hired as manager of the Perry Chamber of Commerce, and continued to promote Perry through that organization.

John and wife Myrtle were married in 1931 as he graduated from A&M. Both taught in the local school system.

In his tenure, John taught math and science, was high school principal, and coached wrestling. Myrtle passed away in February 1994, on the afternoon of John’s 90th birthday, while a regional wrestling tournament was being held in John Divine Hall, just a block from their home.