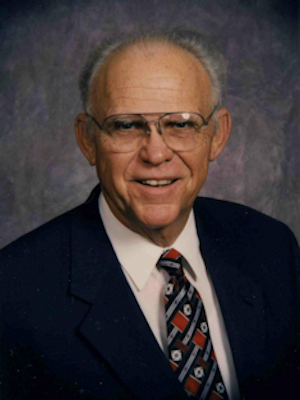 George W. Hall, a community leader and chairman of the board of the Exchange Bank of Perry, took great delight in telling others about Perry and its rich history. He was born in 1927 and was in the third generation of the Cherokee Strip Land Run.

In elementary and junior high school, George was known as the “class cut-up” and was never more happy than being with friends and family–a true “people person.” At PHS, he played football on the teams of revered coach Harold “Hump” Daniels. Under Hump’s tutelage, George played as if every day was his last to play. He was an All-State defensive tackle and was recruited by both the University of Oklahoma and Oklahoma A&M (OSU). He received a bachelor’s degree in Business Administration from OU in 1949. He served in the Army from 1950 to 1951 and was discharged with the rank of corporal. He later attended the Wisconsin School of Banking.

After his discharge from the Army, George followed in the footsteps of his father, O.R. Hall, and went to work at the Exchange Bank. He served as president, CEO, and chairman of the board before retiring as Chairman Emeritus with more than 50 years of service to the bank.

George was active in many Perry organizations, including the Boy Scouts of America, the First Baptist Church, Rotary Club, YMCA, Perry Chamber of Commerce, and the Perry Golf and Country Club. He was Perry’s Citizen of the Year in 1998. All three of his children graduated from PHS and he was a big supporter of all of their activities.