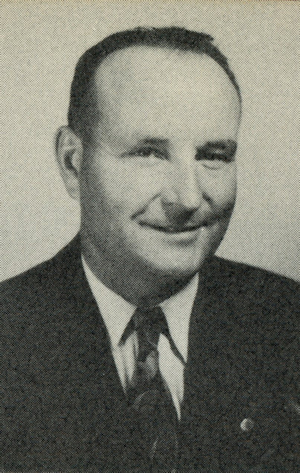 Spudds Widener began teaching vocational agriculture at PHS in 1946 and later worked for the Farmers Home Administration, becoming the state executive director.
Prior to coming to Perry, he taught at Carnegie, OK, and served in World War II as an infantry sergeant in the European theater.

Spudds was a graduate of Oklahoma A & M College (now OSU), majoring in agriculture. While at A & M, he was a member of the wrestling team.

Spudds was born in Grant County, OK, in the small town of Jefferson. He was the youngest of several brothers.

He was the designer of the Perry Rural Fire Department and created the first FFA mothers’ club in the state of Oklahoma.

When he left teaching, he went to work in 1955 for the Farmers Home Administration and retired as state executive director after serving in the post from 1968 to 1972.