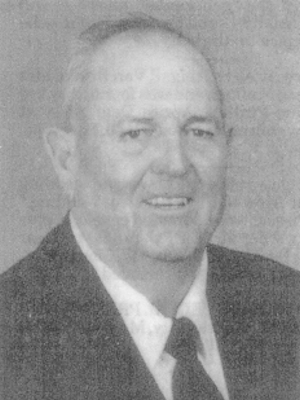 Gene Wood was a good friend to all and had a deep love for the city of Perry.

He was well known as Perry’s greatest volunteer recruiter because no one could tell him “no.”

Gene was born in Noble County, the son of Stanley and Ruby Wood. He graduated from PHS in 1943.

He was married to his high school sweetheart, Dorothy Hull, for 62 years before his death in February 2006. Except for his military service, Gene lived his entire life in Perry.

Two days after his high school graduation, he joined the United States Army Air Corps. Following his discharge, he worked in law enforcement in Noble County for many years. He was Perry Chief of Police for 12 years and a Noble County undersheriff for four years.

After law enforcement, he worked for Triton Insurance and later for The Charles Machine Works, Inc. as director of personnel services.

Following that he worked as manager of the Perry Chamber of Commerce. Even after retirement, Gene was busy working part-time for Casteel Real Estate and Brown-Dugger Funeral Home.

Gene was awarded Citizen of the Year in 1967. In 2005, he was one of ten inducted into the Perry Chamber of Commerce Hall of Fame.

Gene was a proud member of the Perry Noon Lions club, receiving many commendations from the Lions Clubs locally, statewide and nationally.