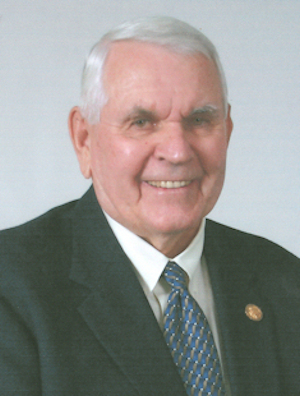 Bert (Albert) Bezdicek was born southeast of Perry to Frank and Mary Bezdicek. He married Wilma Stark of Mangum, Oklahoma. Bert had many achievements in the livestock business, banking, and agricultural development at the state and national level.

Bert attended Pikes Peak District 79 School through eighth grade. He and close friends started the Perry 4-H Club. He was the president and held offices at the local, county and district levels. His Noble County Livestock Judging Teams won state and regional contests, and he was a delegate to the National 4-H Congress in Chicago in 1946.

He graduated from Oklahoma A&M with a bachelor’s degree in 1951. He was a member of the Collegiate Livestock Judging Team, winners of several national contests. He remained active in the OSU Animal Science Alumni Association of which he was president.

He returned to Oklahoma in 1973 as Trust Officer of the First National Bank of Oklahoma City. During a 20-year banking career he held top executive positions in several large banks. After returning to Oklahoma, he studied at the University of Tulsa and the Oklahoma City University School of Law.

Bert was President of the Southwest Livestock Foundation, Oklahoma 4-H Foundation, Oklahoma City Farm Club, the National Trust Real Estate and Oil & Gas Association, and Oklahoma Farm Managers and Rural Appraisers Association. He served as a Director of the Oklahoma City Chamber of Commerce and as Vice Chairman of major Chamber councils. He was a member of the International Association of Energy Economists, American Agriculture Law Association, and Key Club, and he served on Gov. David Boren’s Agribusiness Development Committee. He was a Contributing Editor to the National Agri-Finance Magazine and the Successful Farming Magazine, as well as panel member for the Texas Real Estate Research Center. His awards are too many to mention in this brief biography.

Bert retired from banking in 1993 and started a small oil company, BEZ Resources LLC, located south of Perry. In January 1999 Bert and Wilma retired in Perry, where he is serving as Director for the Perry Memorial Hospital Foundation Board and is a lay leader of the First United Methodist Church of Perry. He and Wilma have three daughters, Sandy, Peggy, and Pam, and three grandsons.