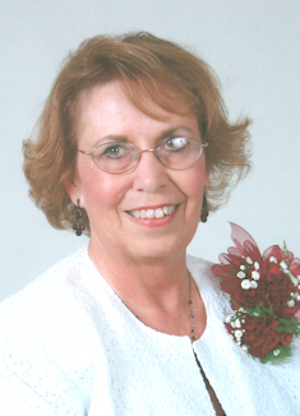 Gloria Brown, managing editor of the Perry Daily Journal, was born in Norman, Oklahoma, to Raymond and Lucille Felkins. She moved her sophomore year to Perry where her father ran Ray’s Shoe Repair Shop.

Her parents moved back to Norman six months before she was to graduate, but she remained in Perry to complete high school, sharing an apartment over Sheets Plumbing with her friend Janis Harris. Gloria worked as a “soda jerk” at Foster’s Corner Drug while in high school and says she met her husband, Jesse (Jay) Brown, while she was “standing on the corner watching all the boys walk by.” They married in July 1960 and established their home in Perry.

Gloria worked not only at Foster’s Drug, but also for Smith Trucking, Chris’ Pharmacy and Larry’s Gun Shop. She started filling in as a proofreader for the Perry Daily Journal in 1971 and soon accepted a 20-hour-a-week job from Editor Milo Watson that developed into a lifelong career. After one year she became Society Editor, then Family Living Editor, from there to Editor, and then Managing Editor in 2002. She has passionately covered political, civic and sporting events, and learned photography from Gene “Scoop” Taylor.

Gloria has served on and chaired the Future Business Leaders of America Adult Advisory Committee, and has been on the boards of the Noble County YMCA, the Perry Education Foundation, Perry Camp Fire Organization, United Fund, the Perry Development Coalition, Overcoming Through the Crisis, Main Street of Perry, and President and Associate Member of the Perry Study Club.

Gloria and Jay have three children: Tracy and his wife Kim in Pottsboro, Texas; Angela Abney and husband Rufas in Lamar, Missouri; and Twana Brown in Stillwater. They have six grandchildren.

Gloria serves on the Board of the Assembly of God Church as Secretary/Treasurer and was the Charter President of Aglow Lighthouse in Perry.