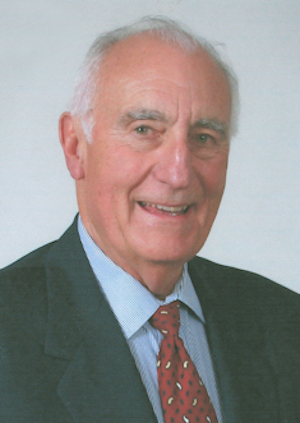 King Kirchner, the son of Thelma and Kenneth Kirchner, grew up on a farm six miles west of Perry in 1927. He attended his first three grades in a one-room school and then enrolled in Perry schools, where he was on the wrestling team and graduated in 1945.

Having worked as a roughneck beginning at 16 years of age during summers, as an Engineer for Lufkin Foundry and Machine Company in Texas, and as an Engineer and Vice President for Unit Drilling Division of Woolaroc Oil Company in Bristow, Oklahoma, in 1963 King and a silent partner borrowed money to buy the Unit Drilling Division and founded Unit Drilling Company (later Unit Corporation) in Tulsa. In 1979 Unit went public and was later listed on the New York Stock Exchange in 1981. King retired as CEO in 2001 and as Chairman of the Board in 2003. He continues on the Board of Directors. As CEO, he grew Unit from 3 rigs to 55 with interest in 2,830 wells and regional offices in Oklahoma, Texas and Wyoming. Today, Unit is the U.S. fourth largest land drilling contractor, a $2.6 billion market capital company operating 112 rigs. It has ownership in over 6,000 wells and, through Superior Pipeline Company, owns 480 miles of pipeline. Unit employs almost 3,000 employees nationwide with about 1,400 working in Oklahoma.

King has logged more that 8,000 flying hours as a pilot. He has owned more than 150 airplanes, and holds multi-engine, commercial, instrument, glider, jet and Air Transport Pilot ratings. His Sky King Corporation buys and sells aircraft.

King has participated in and donated to many charitable organizations, and has received many honors, including induction into the Oklahoma Hall of Fame.