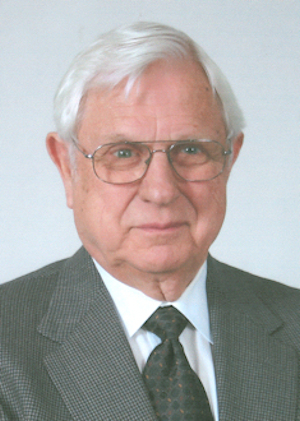 Reginald (Reg) Loeffelholz grew up in Perry and attended grades one through twelve in Perry schools. While in PHS he was a member of the student council, Future Farmers of America, Perryscope staff, wrestling squad, the annual staff, and band president. Reg lost all sight in his right eye when he was a child as a result of a skating accident, but he never considered it a handicap or asked for any special treatment or consideration. He graduated from Perry High School in 1947.

Reg received a degree in Agricultural Economics from Oklahoma A&M (OSU) in 1951. He was a member of the Sigma Phi Epsilon fraternity and on the Dean’s Honor Roll. In 1952 he married Jerry Sue Story, a fellow student at A&M.

After leaving college, Reg worked for Wilson Packing Company until 1956. He then went to work for the Oklahoma Farm Bureau Insurance Company. During his career he rose through various positions from a Claims Examiner to the position of Executive Vice President and General Manager. At the time of his retirement in 1994, the company employed 215 people and 195 Farm Bureau agents throughout the State of Oklahoma, and did an annual business of $110,000,000. Loeffelholz steered the company from an unprofitable condition to that of a viable, profitable company, a feat that was recognized throughout the industry.

Reg and Jerry raised four children of their own and, in addition, due to the untimely death of his sister at the age of 36, took into their home his sister’s three children in their early teens. They raised them as their own children.

Jerry, died of cancer in 1994. He married Pat Fletcher in 1996, and lives in Oklahoma City. They do a lot of traveling to visit children and grandchildren.

Reg serves as a docent at the National Cowboy Museum in Oklahoma City. He and Pat are members of St. Eugene’s Catholic Church.