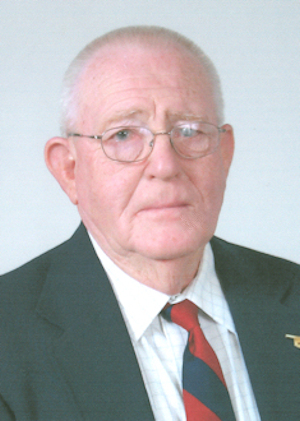 Bill Rotter graduated from Miami, (Okla.) High School. He received his Bachelor of Science Degree from Oklahoma State University and a Master’s Degree from Central State University. Bill is married to the former Marvie Dauman. They have four children, eight grandchildren and a great grandson.

Mr. Rotter (often called “M.R.”) has been an educator for 43 years, and held positions in Kansas, Oklahoma and Texas. Of the 43 years, 27 years were spent in Perry Public Schools. Bill was band director for 20 years and the high school principal for 7 1/2 years. He has also been known to coach a few baseball teams — American Legion, Little League, and occasionally he filled in as the Perry High School baseball coach.

Bill’s bands in Perry received many outstanding awards in field and parade marching, concert playing and jazz ensembles. One of the noteworthy events was marching in the inaugural parade of Richard Nixon in 1973. He is a charter member of the Oklahoma Music Adjudicators Association, the Oklahoma Bandmasters Association, and a longtime member of National Jazz Educators. He has also served as a clinician in several states and worked at several band camps.

Bill Rotter was inducted into the Oklahoma Bandmasters Hall of Fame in 1992. On occasion, he is called back to duty when a band director is needed. He also continues to work with two small ensemble groups and with Perry’s “Great Big Band.”

Bill helps with parade and entertainment for Perry’s September 16 celebrations. He has served on the Board of Directors for the Chamber of Commerce and is a past president of that organization.

Fishing, golfing and watching baseball are Bill’s hobbies, but you may drive by his house and see him being the “yard boy” when he is not busy with other things.