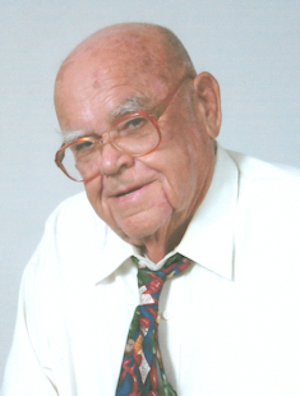 John Skinner started life as any other young person in Perry, but when he was nine his life changed significantly. He became ill…and it was determined that he had polio. He suffered months of tests, isolation, hospitalization, surgeries, casts and braces.

Coach Hump Daniels took a great interest in John and invited him to be the mascot of the Perry High football team. Wrestling coach John Divine asked John to take on the same responsibilities for the wrestling team. These two activities gave John a new lease on life, and were perhaps the most meaningful of his school years. He was much involved in school activities and was named “Most All Around Student” of his senior class.

John’s participation in the national March of Dimes drive, to eradicate the new devastating disease of polio is notable. The first year, Noble County designated $150 as its goal, which John made his own personal goal. Through hours of personal contacts with community people, students, and going door-to-door–even meeting the buses that came through Perry–he attained that goal. The following year the county goal was $300, and, this became John’s personal target. Again, he achieved his objective. Throughout high school he worked in the drive. His senior year he personally collected over $10,000–a remarkable sum for those times. John received a personal thank you letter from President Franklin Roosevelt.

Upon graduation from Perry High, John was offered a scholarship as athletic trainer for the Oklahoma A&M football team. He led the team in pre-game calisthenics and performed other duties. He was well-liked and was elected president of the Freshman Class.

John left college after his freshman year to become involved in business in Perry.

He was active with the National Guard and was deemed the “morale builder.” When the 45th was activated John accompanied it to Ft. Polk, Louisiana, where he was often referred to as the “biggest little General” in the Army.

After returning from Ft. Polk, he worked at a variety of jobs, including as the maitre d’ at the famous Beverly’s restaurant in Oklahoma City. In his late thirties he enrolled at the Vocational College at Okmulgee, and graduated as the top student in his class. He became the office supply manager for the Tulsa Sears Store for many years, and later secured a position with the Sonic Drive-In. After several years, John decided that it was time to go back to Perry where he has become an entrepreneur.

John has worked in many endeavors to make Perry a better community. Whether it is serving on the Board at the Cherokee Strip Historical Society, or soliciting contributions for various civic projects, or helping with town celebrations and parades, there can be no doubt that John Skinner takes great pride in his hometown of Perry.