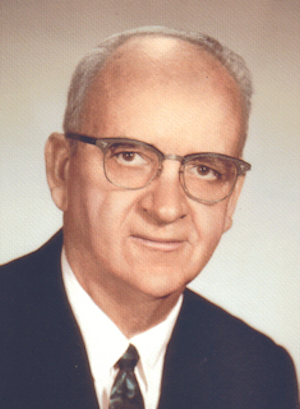 Eb (as he liked to be called) taught in the Perry School System until retirement in 1971. During his tenure, he taught woodworking, crafts, science, driver’s education, home economics, and, for a brief stint, was assistant football coach (with Hump Daniels). Even though he was best known as the woodworking teacher, he was proud of his accomplishments in the other subjects.

In the 37 years he taught, Eb touched the lives of over 1900 boys and girls. As a teacher, he was fair and impartial, but when aggravated, “Watch Out!” Back then, those who did not follow the rules were subject to “peer punishment.” When A. L. called out “Belt Line,” everyone knew that someone was going to have a sore bottom for the rest of the day. The class would gather at the back door of the shop, form two lines, and remove their belts. The offender started down the lane with a swift blow from Eb’s paddle and then walked (or ran) down the lane where each of the other students would give one smart slap with their belts at the offender’s derriere, and then it was back to learning.

During his woodworking teaching years, many of his classes won awards with their projects at the State woodworking contests. One student constructed a double pedestal desk out of solid black walnut, applying 15 to 20 coats of finish, and rubbing them out between each coat. The finish glistened and reflected as if it were a mirror! Students built rocking chairs, lawn furniture, chests of drawers, desks, book cases, and many other useful items.

Mr. Ebersole was perhaps best known for beginning his students with a “squaring the block” assignment. He said many times that if a student could take a block of wood, a sharp plane, and a tri-square and make surfaces “square” with the adjoining surfaces, he (or she) could make beautiful and useful projects. A. L. taught students to look at a piece of wood for its inner beauty—not just as lumber or a chunk of wood. The validity of that approach is proven by his students many projects that remain in use today. His son, Sam, has the desk he made in 1949, and it is in wonderful condition. Thirty-two years after Mr. Ebersole’s death, students still call Sam to tell him, for example, that they are using the dresser they built in Eb’s woodworking class. Sam has many of the personal tools his father used and would not part with any of them for any reason.

A. L. was also a gifted farmer – even when using some primitive equipment. He farmed with a 1930 “D” model John Deere tractor (bought new by his father) and a 9N Ford (about a 1948 model). The family farm is located one-half mile north of the present football stadium – where his daughter-in-law, Jeannie, and son, Sam, built their home in 1999.

A. L. passed from this life on October 22, 1977, caused by a massive heart attack. He is buried at Grace Hill. Mrs. Ebersole is now by his side, having passed away in 2003. Mr. Ebersole and the values and skills he taught live on in the lives of his students.