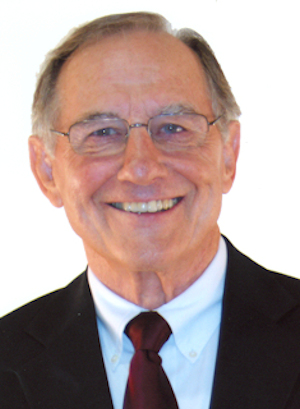 Rex Edgar, a standout high school and collegiate athlete, coach, banker, and Oklahoma National Guard lietenant colonel, was the first vice president of the Perry High School Alumni Association. A native of Hayward, OK, he moved with his parents to Perry as a child and entered the fifth grade. His brother, James, also attended Perry schools.

Rex was a Member of the High School Honor society for four years. Wrestling at 148 lbs., he won the Geary Tournament as a junior and senior, and at State finished fourth as a junior and third as a senior. He was All-Conference Tight End and Co-Captain of the football team his senior year. He was All-State in Baseball and played in the 1953 Oklahoma All-Star Baseball game Aside from being on PHS sports teams all four years of High School, he also played Semi-Pro for the Perry Oilers Baseball Team (1952-56).

Rex attended the University of Oklahoma (OU) on a wrestling scholarship, where he lettered for three years, was Big-Seven Champion at 167 lbs., an All-American by placing third in the NCAA Tournament, and a member of the 1957 National Championship Team. Rex was on the OU Freshman Baseball Team (1954). He graduated in 1958 with a Bachelor in Business Administration in Accounting. He later earned a Master of Science in Educational Administration at Oklahoma State University, and he graduated from the U.S. Army Command and General Staff College at Fort Leavenworth, KS in 1976.

Mr. Edgar has been highly successful as a coach, in banking, in the Armed Forces, and in service to his community. As the head wrestling coach at Perry High School (1961-69), his teams won six state championships (when there were only two classes, AA and A); he coached 21 individual state champions; and he was Coach of the Year for 1963, 64, 65, and 67. As head football coach from 1963-69, Rex took the Perry Maroons to three conference playoffs, and Perry celebrated its first undefeated football team since the 1940s. Rex was also a dedicated teacher and superior school administrator.

Rex answered his nation’s call to help rescue the nation’s banking system from the early 1990s savings and loan (S&L) crisis. As the Assistant Director of the Oklahoma/Arkansas/Missouri Division of the Federal Deposit Insurance Corporation (FDIC) from 1991-94, he was responsible for the management and liquidation of 65 S&L businesses with assets over $1 B. After the FDIC, Rex took a position with the Bank of Boston as Manager of the Credit Card Division with 4 M credit cards from 1995-2004.

Mr. Edgar served his country in the Oklahoma National Guard from 1958 to 1978. He was the Provost Marshal of the 1st Brigade, 45th Infantry Division; Commander of the ft-Battalion — 179th Infantry —Tulsa; and Commander of the ft Battalion-Infantry-Perry. He retired as a Lieutenant Colonel.

Rex retired in 2004. He has been married to Dovie Hanna Edgar, a graduate of Perry High School, for 51 years. They have two sons: Jeffery Layne Edgar of Fort Worth Texas; and Bryan Thomas Edgar of Oklahoma City. Rex and Dovie reside in Tulsa.