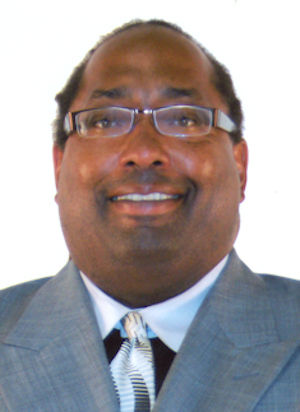 Dr. Kevin McPherson, a leader in community social services in Oklahoma City, attended Perry schools from third grade until graduation. During high school, he participated in football, wrestling, baseball, and student government, and was named to the National Honor Society. In his senior year, he played linebacker and was captain of the football team. In wrestling, he was captain on the 1984 state champion team and a member of the 1983 state runner-up team. He was a faithful member of the Mt. Olive Methodist Episcopal Church, where he served as a junior trustee and president of the young people’s department. He is the son of Mary McPherson and Ernest Copeland, longtime Perry residents.

Upon completion of high school, Kevin attended Northeastern Oklahoma A&M College at Miami, Oklahoma on a football scholarship, again excelling as a student as well as an athlete. Kevin transferred to the University of Oklahoma (OU), where he majored in Public Administration. At OU, he participated in the President’s Achievement class, Phi Beta Sigma Fraternity, the Public Administration and Political Science Collegiate Organization, the National Panhellenic Council, the University Resident Advisors Organization, and the Black Student Association. Kevin graduated from OU in 1988 with a Bachelor of Arts Degree in Public Administration with an emphasis in sociology.

In 1990, Kevin was accepted into the prestigious Master of Public Administration Program at the Maxwell School of Citizenship and Public Affairs at Syracuse University, NY. There he served as a Resident Advisor and as an executive member of the Black Graduate Student Association. Kevin graduated in 1991 from the Maxwell School with a Master’ Degree in Public Administration with an emphasis in Public Management. Relocating to OU, Kevin began his doctoral studies, and along the way he earned a Master of Human Relations Degree in 1993, with an emphasis on human resources and counseling. Kevin capped his formal education by completing in 2003 the requirements for a Doctor of Philosophy in Adult and Higher Education with an emphasis on training and development.

It is noteworthy that during the entire period from 1984-2003 while earning his degrees, Kevin was not only on scholarships but also working multiple jobs simultaneously to pay for his living and educational expenses. His notable list of employment is too long to include, but mostly related to education and community service.

While working toward his PhD, Kevin co-founded the Community Adolescent Rehabilitation Effort (C.A.R.E.), a community-based social services agency in Oklahoma City, with a focus on providing gang prevention and intervention, as well as substance abuse prevention and intervention services to adolescents and their families. Kevin has also served as a professor of African and African-American Studies at both OU and Oklahoma City University. Kevin worked with a foundation to promote sustainable development in some African countries. In doing so, he built upon many years of teaching and taking students on tours of Africa, and his experience as a teaching assistant in Political Science at the University of Lagos, Nigeria, Africa (1991-1992). In 2003, Kevin was a key actor in the establishment of the Marcus Garvey Leadership Charter School in Oklahoma City.

Dr. McPherson is married to Elizabeth Latta from The Gambia, West Africa. They have two daughters and one son, and reside in Oklahoma City. Kevin states that “the foundation for all the work that I do comes from the life-principles and values instilled in me growing up in Perry, Oklahoma.