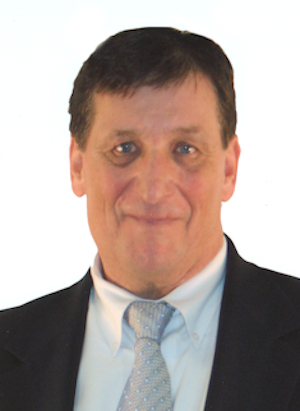 John Klein was born in Perry, while his parents lived on a farm north of the town. His mother was Mary Louise Steichen, a member of the large Steichen family, while his father, George Klein, had grown up in Blackwell. John attended Perry public schools and at PHS was a three-year starter on the football and baseball teams, President of the Student Council, President of the Fellowship of Christian Athletes, and, importantly for his later career, the sports editor for the Perry High School student newspaper and a volunteer sports writer for the Perry Daily Journal.

Upon graduation from Perry High School in 1972, John enrolled at Oklahoma State University (OSU), where he earned a degree in Journalism. John says he had known from his youth that he wanted to be a sports writer. While at OSU, he and Ed Kelley (a fellow Honor Roll inductee) shared a room together while they both did an internship with The Daily Oklahoman.

John’s first full-time job in his profession was for The Daily Ardmorite from 1976-78. He moved from Ardmore to Tulsa to become a sports writer for the Tulsa World for seven years. John then accepted a position with the Houston Post as a sports writer in 1985, where he was the Southwest Athletic Conference beat writer and the backup writer on the Houston Astros.

John returned to the Tulsa World as a news reporter from 1990-1995, during which time he led coverage of the Oklahoma City Murrah Federal Building bombing. In 1995, he became the Sports Editor and a columnist for the Tulsa World, and since 2005, John has served as the newspaper’s senior sports columnist.

In a career spanning more than 30 years, John Klein’s work in sports journalism has been enjoyed by people across the country and includes every major sporting event. He has picked up numerous awards from the Associated Press, Society of Professional Journalists and other journalism organizations. He was named Oklahoma Sports Writer of the Year in 2000, the State’s top wrestling writer seven times in seven years, and named top college baseball writer in the nation for the decade of the 1980s by Collegiate Baseball Magazine. His columns currently run in the Tulsa World at least three times a week. He is a member of the Football Writers Association of America, Basketball Writers Association of America, and National Sportswriters and Sportscasters Association.

With all of his accomplishments, his Perry roots and connections remain strong. He is a fourth-generation Perryan and he often tells stories of his youth, including his student council campaign with the slogan, “Tippecanoe and John Klein too.” A number of his columns have featured Perry. In one of John’s columns for the Tulsa World, he wrote of his family – the Steichen family. In one column he described family members attending the funeral of their patriarch, John Steichen, who was born in a small house on Sunny Slope Farm north of Perry in 1920 and who was buried at the St. Rose of Lima Catholic Church in Perry. He wrote, “We took a picture of all the cousins, the fourth generation of Sunny Slope descendants. I looked around and saw a physician, college professor, CFOs of huge corporations, college administrators, a Broadway musician, airline pilot, Air Force navigator, pharmacists, social workers, teachers, [lawyers], and even a sports writer. More importantly, they were all nice people.”

While many celebrity sports figures consider John a friend, those closest to him are his family and the boys who grew up with him not far from his childhood home on the corner of 7th Street and Ivanhoe. John cherishes those relationships forged more than 50 years ago and is proud of his hometown.

John is now an uncle of seven, two of whom are also Perry graduates, who have followed his footsteps into journalism: Ginnie Netherton Graham at the Tulsa World and Carrie Netherton Salce at Tulsa’s Fox 23 News. John has been married to Lisa DeBasio Klein for 24 years, and they have a beloved dog, Bella. He enjoys going to state lakes, traveling to national parks, discovering new restaurants, and is a connoisseur of fine wines.