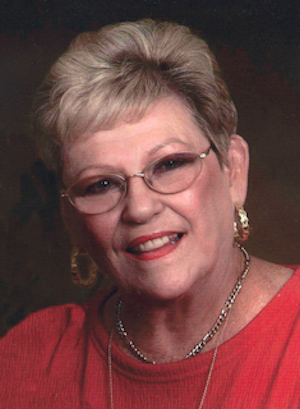 Lois Ann “Sandy” Groom Morrow was a devoted volunteer and a board member of the Perry High School Alumni Association. Her parents, Loren and Agnes Groom, moved the family to Perry from Covington when Sandy was in second grade. At PHS, she was active in band, Glee Club, and Student Council.

In July 1955, Sandy began a short career with Southwestern Bell Telephone Co. as an operator. After Paul graduated from OSU and began his military service, Sandy held a number of office positions and continued that line of work as they moved from place to place because of Paul’s career and jobs as an engineer. She often referred to her stint as a secretary in the District Attorney’s Office in Tulsa as her favorite job. The Morrows returned to Perry in 1972.

Sandy was active in numerous organizations over the years, but her favorite and most constant endeavor was the Perry High School Alumni Association. Both she and Paul became lifetime members as soon as that option was made available. Sandy was elected to the Alumni Board in 1991, and served on the board for many years. She continued to support the Association and volunteered for many of the tedious chores that were required to run the operation smoothly.

The Perry High School graduate who nominated Sandy for the Honor Roll wrote in that nomination, “Sandy was the epitome of a perfect Alumnus. She served on the Board for many years, volunteering for almost every job and committee. She organized and worked diligently at the Alumni Center every week, even at the end of her life. It was that important to her. We could always count on her to speak up and support our cause at any and every opportunity. She was such an advocate of Lifetime memberships and shared that enthusiasm at countless class reunions. (Her and anybody else’s she attended.)”

Sandy excelled in a number of things, but a couple of her more outstanding qualities were in organizing and decorating. At the Perry High School Alumni Association, she was directly responsible for the sorting, boxing and displaying pictures, trophies and assorted donated memorabilia. Over the years she spent hours weekly doing this voluntarily to the great benefit of the Alumni Center building (so graciously provided to the Perry High School Association by Leroy Rolling). Her touch in decorating is evident in many of the pictures and displays located in all three rooms of the Alumni Center.

Sandy passed away on April 20, 2009, at Perry Memorial Hospital after a long hard fought battle with cancer. She is sorely missed.