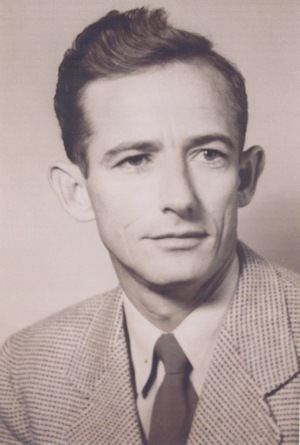 Everett Chaffin was awarded a Bronze Star, Purple Heart and Combat Infantry Badge for his service in World War II.

Everett graduated from Bagley High School in 1934 and earned a bachelor’s degree in Business Education from Northeastern State University in 1940, the same year in which he enlisted in the U.S. Army. After his active duty ended in 1946, he was in the Army Reserves from 1946 to 1977, retiring as a Lieutenant Colonel.

He began his teaching career in 1948 at Eufaula Public Schools where he taught until 1953. During that time, he worked on his master’s degree in agricultural education from Oklahoma State University and received it in 1950.

In 1954 Everett, his wife, Betty, and family moved to Perry where he began his memorable career as the PHS Agricultural Instructor and Future Farmers of America faculty sponsor. He taught in Perry for 23 years until his retirement in 1977. He was named Perry High School Teacher of the Year and received the FFA Honorary American Farmer Award. In 1988, the Perry Junior Livestock Show was dedicated to Everett for his many years of service to the program.

Everett was past Commander of Perry American Legion Post #53, a member of the 33rd Infantry Division Organization, and a member of several civic clubs.

As a teacher, he developed close relationships with generations of students, who not only learned in the classroom, but also were taught discipline and pragmatism by example. His teaching of practical knowledge and inculcating the drive to accomplish goals and dreams in his students was the hallmark of his career and is no place more evident than in his four sons.