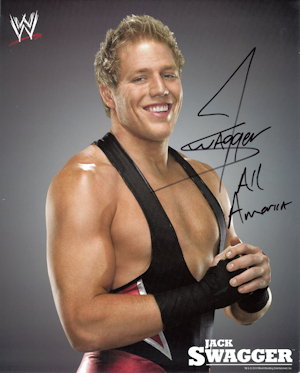 Winning his first World Heavyweight Championship in 2010, Hager continues to appear each week on either Monday Night Raw or Friday Night Smackdown, nationally televised shows of the WWE.

Jake began wrestling at the age of five in Perry. As a Maroon, he was a wrestling state champion in 2000, an All-American Scholar, a member of the National Honor Society and the German Club, and Mr. PHS, as well as being an officer of his class three times.

After high school he wrestled for the University of Oklahoma. At first, he also played football for OU but decided to focus on wrestling starting in his sophomore year. In 2006 at OU, he set the record for most pins in a season with 30. In the NCAA Division I championships, as a senior, he had a seventh-place finish. He was named an All-American in his senior year. Jake graduated from OU with a bachelor’s degree in Finance.