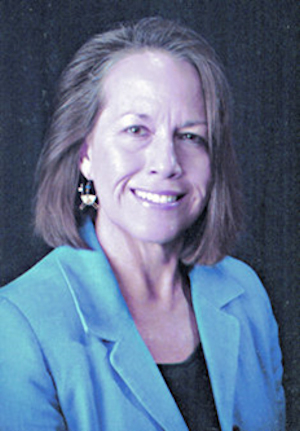 Martha Rupp Carter is a judge, a lawyer who worked for the city of Tulsa for many years, and an active member in many professional organizations. She is the daughter of Perry residents Robert and Dorothy Rupp, the granddaughter of the late Lee Rupp, who farmed near Perry, and Emily Rupp, who migrated in 1922 from Russia to the Perry area.

After graduating from Perry High School in 1973, Martha earned a Bachelor of Arts degree in English with honors at Oklahoma State University.

Martha held leadership positions in the Arts and Sciences Student Council, Mortar Board and the Kappa Alpha Theta social fraternity. She was selected as the Outstanding Senior in the OSU College of Arts and Sciences!

Martha received her Juris Doctor degree from the University of Oklahoma School of Law in 1980. She was picked for the OU Law Day Moot Court, won the Best Brief Award, and was on the OU National Moot Court Team. Martha was a member of the Order of Barristers and president of her senior class.

Martha is currently a Special Judge of the Tulsa County District Court. She served in the Domestic Relations Division and is now in the Civil Division of the Court. Previously, she served as an adjunct settlement judge for the U.S. District Court for the Northern District of Oklahoma.

Judge Carter practiced law for 31 years, five years in private practice and 26 years in public service. She was the first woman deputy city attorney and first woman city attorney for Tulsa. In this position, she was Tulsa’s chief legal advisor for elected officials and employees and Tulsa government entities; managing the legal department of 18 attorneys and 10 support staff. She then served as the general counsel of the Tulsa City-County Health Department and the Tulsa City-County Board of Health, the policy setting and oversight body for the department.

Martha was a member of the board of directors of the Oklahoma Association of Municipal Attorneys and has lectured at the association’s legal education seminars.

Martha is married to attorney Lewis Carter; they have two daughters, Jackie and Emma. Jackie is a Peace Corps volunteer in Cameroon, Africa; and Emma is a senior at Booker T. Washington High School in Tulsa.

Martha says: “Growing up in Perry from the age of two was a positive experience…My family, friends, and friends’ parents were nurturing and supportive. Perry looked after its young people, provided me a good education, appreciation for what a good community can do, and the importance of giving back; and, importantly, with many excellent role models. The late Perry attorney Emmett Rosser was a mentor to me, and I still heed his advice. I remain grateful to the many kind people of Perry who helped and befriended me. I am humbled and honored by this recognition.”