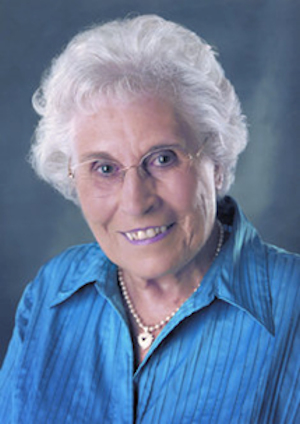 Ethel Delores Coe is known for giving back to her community by participating in a great number of civic and governmental organizations, as well as being Noble County Clerk for many years. She was born to Glenwood and Edna Ewy Groom, and was named for her grandmother Ethel Florence Groom. She attended the first and second grades at the Hempfling rural school and then transferred to the Perry school system, from which she graduated in 1953. Ethel earned a bachelor’s degree in business in 1957 at Oklahoma A&M (now OSU), and returned to Perry.

Ethel held several jobs before beginning work with Cress, Matthews and Kasper, attorneys at law, where she became a legal secretary and learned much about the field of law. In 1971, she was elected by a three-to-one majority vote to become the Noble County Clerk, where she served for 20 years without electoral opposition. She served on the County Clerks Legislative Committee for four years. A new Oklahoma retirement law allowed Ethel to retire at age 57. In the fall of 1968, Ethel attended tax school and began her own tax business, which she operated until 2005.

Ethel’s contributions to Perry through community organizations are astonishing! She has been president of the Perry Business and Professional Women’s Club, Beta Sigma Phi sorority, the Northwest District County Clerks Association, the Oklahoma County Clerks Association, the Noble County Democratic Women’s Club, and, most important to this Honor Roll Award, for 10 years, Ethel rendered outstanding leadership as president of the Perry High School Alumni Association.

Ethel was appointed by the Oklahoma State Election Board to serve on the Noble County Election Board, and was elected chairperson of this board. She served as secretary for the Board of County Commissioners, the Excise Board, the Board of Equalization and the Board of Corrections — all of these for Noble County simultaneously for 20 years! She also served on the boards of the Cherokee Strip Museum, the United Fund of Perry (eight years), the Central Democratic Committee, and the Dough Club. She is a past member of the Perry Chamber of Commerce.

Ethel married Lyle Blake Coe in 1979 and together they have four children: Cheryl Brassfield is married to John Brassfield, Lyle Coe is married to Anita, Susan Coe is married to Randy Garner, Alesa Coe is married to Bobby Bocox. Together, Ethel and Blake have seven grandchildren and seven great-grandchildren. Ethel says she and Blake enjoy dancing, fishing, vacationing and doing things together. She says she would rather dance than eat. Her other hobbies include embroidering, crocheting, baking, growing flowers, and cooking big dinners for her family and friends. Blake and Ethel for 30 years have supported FFA and 4-H clubs of Noble County with trophies for shows. She loves competing at and winning ribbons at the county fair.

Ethel says she is a very happy person who enjoys every day of life, loves her family and is so thankful they can enjoy being together. Moreover, she cherishes her friendship with so many people of Perry and Noble County with whom she has worked and cooperated for so many years. Perry, she says, “is a great place to live.”