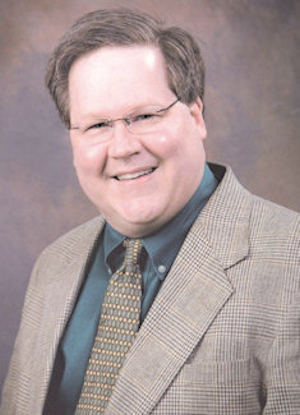 Dr. Rodney (Rod) Hicks is a highly qualified nurse, administrator, and educator in the field of patient safety in hospitals. A native of Perry, he was born to Roberta and Earl Dean Hicks in 1960. He played the trombone and tuba in Perry Maroon Band, and participated for three years in Stage Band opportunities. He joins a number of successful PHS graduates in having worked at the Kumback Lunch, and he also worked at the Perry Memorial Hospital — foreshadowing his remarkable success as an important contributor to America’s health care.

Scholarships from the Perry Memorial Auxiliary and the Fleming Foundation helped Rodney launch his impressive achievements in education. While still in high school, Rod began his formal training in the medical field by taking an Emergency Medical Training at Northern Oklahoma Junior College to become the youngest EMT in the state. He began pre-nursing at the University of Central Oklahoma, and then, while working as a monitor technician at Presbyterian Hospital, completed nurse’s training at OSU in Oklahoma City in 1982.

Rod then moved to Tulsa to work in the intensive care unit of St. Francis Hospital. In 1983, he relocated to the Veterans Administration Hospital in Dallas, TX, where he was also in the ICU. In 1986, Rod moved to Midland Memorial Hospital where, in addition to working in the hospital, he earned in 1987 a Bachelor of Science in Nursing from the Texas Tech University Health Sciences Center in Odessa, TX.

Rod also began graduate studies while in Midland, earning from The University of Texas at Arlington a Master of Science in Nursing in 1991, and subsequently a Post-Master’s Certificate as a Family Nurse Practitioner in 1993. Amazingly, Rod then earned during 1997-2000 a master’s degree in public administration from the University of Texas in Arlington, TX.

Moving to Washington D.C., Rod began working for the United States Pharmacopeia (USP), which sets all standards for products coming to market and ensures safety and conformity to general manufacturing processes. While in Washington D.C., Rod topped off his formal graduate study by completing requirements in 2006 for a Doctor of Philosophy in Human Services with a concentration in health care administration from Capella University in Minneapolis, MN.

The positive effect for Americans of Rod’s study and research as a student and professor and his work with US Pharmacopeia, based on his years of work in patient care, has been significant. His more than 100 papers and national reports, plus presentations and training of medical personnel, have increased patients’ safety and reduced medical errors (especially during surgeries and in the care of children) in more than 5,000 hospitals and 5,000 ambulatory surgery centers in the United States. Just think, it all started in Perry with Rod’s work in Perry Memorial Hospital. He is recognized as a Fellow of the American Academy of Nurse Practitioners and a Fellow of the American Academy of Nursing.

Rod has been with his partner, Michael Kline, since 1986 when he relocated to Midland, TX, where Michael lived. When Michael retired and sold his business in 2000, they moved to Washington, D.C. They now live in Rancho Cucamonga, CA, where they have resided since August 2011.

Dr. Hicks is a professor in the Center of Excellence for Quality and Patient Safety at Western University, where he co-directs a doctoral program and continues research on the important topic of patient safety.

Rod says, “I see many advantages to being a Perry native…many of my colleagues come from large schools and towns. Their sense of community spirit is quite different than mine. Having the stable foundation of the school system gave me many valuable skills that I draw upon every day…I can easily trace some of my success to those days in Perry.”