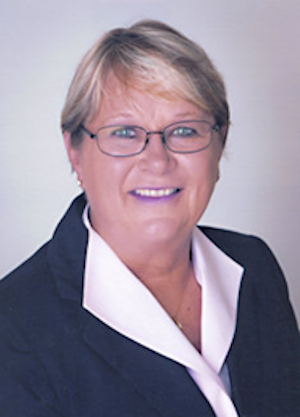 Ranay Schieffer Roth, a Perry product who has guided and inspired students in Perry Public Schools as a teacher, administrator, coach, athletic director, and adviser, was raised on a farm east of Perry. She attended Sumner Elementary School and entered Perry Public Schools in the sixth grade, graduating in 1971. She played in the PHS Band, was secretary for her senior class, secretary of Student Council her junior year, Student Council president her senior year, PHS Band Queen and Miss Perry High School.

Ranay earned at Oklahoma State University a Bachelor of Science degree in Elementary Education (1975), a Master of Science degree in Student Personnel and Guidance (1985), and an Administrator’s Certificate (1995). While an undergraduate, she was on the OSU varsity golf team, a member of the President’s Leadership Class and earned positions on both the Dean’s and the President’s Honor Rolls.

At the end of her sophomore year at OSU, Ranay married Martin Roth, whom she had met in the sixth grade in Perry. Upon graduation, she taught in Perry from 1976 to 1978 while Martin completed his doctorate in Veterinary Medicine at OSU. They then moved to Poteau, where she taught from 1978 to 1985 (Dr. Bert Corr, also a PHS graduate, 1952, was her superintendent).

Active in community service, Ranay has been on the boards of directors of Perry’s YMCA, Perry Golf and Country Club, and the United Fund. She has coached summer little league softball. She has also served as a director for the OSU Alumni Association.

The Roth family is active in the Presbyterian Church where Ranay has been a choir and bell choir director, deacon and elder, and she is on the building committee for the new church building.

Ranay and Martin, who heads Perry Veterinary Hospital, have a daughter and a son, both of whom graduated from Perry High School. Lesley Roth Maloney graduated in 1997, and she and her husband Pat, live in Garrett Park, MD, where she is the senior advisor in the Office of Global Regulatory Operations for the Food and Drug Administration. Cody Roth is an associate director/management consultant for Cowan Associates, which specializes in defense and strategy consulting for the Department of the Navy. He lives in Washington, D.C.

When Ranay came from a class of five students at Sumner to Perry with six sections of 20 students, she knew it was the teacher of her homeroom who instilled the importance of just how much influence a teacher can have on a student. Mrs. Fox, her homeroom teacher, took the extra time to be sure Ranay was “fitting in” with the other students.

Her teachers’ concern for her and her educational growth became the driving force when it came time to choose a career path. Those teachers were Sunday school leaders, supervised play instructors, summer league coaches, and community leaders, as well as citizens of Perry. The role educators have played in the Perry Public School System has not only been in the classrooms, but an important part of the lives of students outside of school.

Ranay strives to follow in the footsteps of her teachers, to be the person a student could depend on as giving them advice – not always wanted, but often needed – and to help them learn from mistakes. She has always been big on “second chances” and provided her students the opportunity to exhibit growth not only in the classroom, but outside, as well. Her students who needed discipline usually walked away knowing she had their best interest at heart. They were treated fairly and often received the “mom’s sermon” as part of their punishment!

Ranay’s philosophy is that God gives people talents. Teaching is definitely a talent because some people are not cut out to be a teacher. Some say they would not have a job as a teacher because it is too difficult.

One reward for a teacher who genuinely cares about a student and goes above and beyond is to see that student be successful, because of that teacher. The greatest reward of teaching is to be thanked for having an impact on a student’s life, either by the parent/guardian, but even better, by the student themselves.

Sometime, somehow, someway, find and thank a teacher for being there for you, as a student.