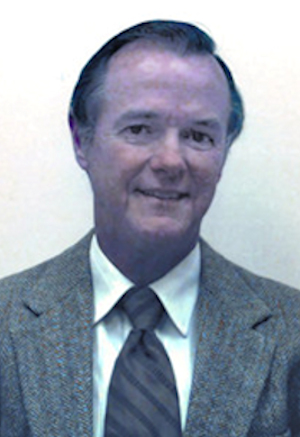 Dr. Kenneth J. Russell, who has a PhD in Physics and whose work with NASA and the U.S. Air Force advanced science in many ways, was born in Noble County to Jess O. and Lille Mae Russell. He attended the one-room, one-teacher Oak Hill Elementary School through the eighth grade. He then enrolled at Perry High School.

From the third to eighth grade he was active in the 4-H Club. At PHS he was a member of Future Farmers of America, PHS National Honor Roll, Future Teachers Association and the wrestling squad. Upon graduation in 1953, he attended Oklahoma State University. He was a member of the Air Force ROTC rifle marksmanship team. By the end of three semesters Ken had run out of money, and moved to Tulsa to work full time for a year and a half while taking a night course at Tulsa University.

He married in 1959 Shirley Ann Patton, who had moved near his parents’ farm. They moved to Stillwater for Ken to continue study at OSU. Ken received a bachelor’s degree in physics in 1959, having worked summers with Chance Vought Aircraft Company in Texas and for the Physics Department during the school years. He was selected to the Physics, Mathematics, and Phi Kappa Pi Honor Societies.

Ken won a graduate scholarship and then a fellowship to work toward a Doctor of Philosophy degree. Ken’s major professor suggested he specialize in Solid-State Physics and to undertake research on electric conductivity in certain types of diamonds, which could lead to high voltage semiconductor circuits for high temperatures. Dr. Russell was awarded his doctorate in 1965; worked for two years in Orlando, FL, for a company; and then took a job with the Hughes Research Laboratory (HRL) in Malibu, CA.

He worked on ion propulsion systems designed for various NASA missions, including the Voyager, now at the outer reaches of the solar system sending data to earth. Ken also investigated processes and materials to advance solid-state microwave technology for NASA and U.S. Air Force projects. This led to various patent applications for improving radar and communications. The designs he developed have been widely copied.

Dr. Russell joined the California Institute of Technology Jet Propulsion Laboratory (JPL) in 1985 in Pasadena, CA, to conduct space research, including developing solid-state space radio and radar that can operate for years. In 1989, he moved to the Aerospace Corporation in El Segundo, CA. Working with these companies, in addition to research, he had managerial duties, monitored NASA and U.S. Air Force contracts with companies, and helped in the development of the Microdevice Laboratory at JPL. With the Aerospace Corporation he continued research on device and circuit design, implementation and reliability for U.S. Air Force space activities, including the Global Positioning System. In 2001, Ken retired to become a consultant to the USAF and companies where he had worked.

Shirley helped Ken through university studies, endured his demanding work schedule, and bore him two sons: Brad Allen and Kevin Dale. Shirley passed to the afterlife in 1999. Ken moved in 2006 to Pauls Valley, where one of his sons lives. Ken has been a pilot, aircraft owner, marathon runner, motorcycle racer and a National Rifle Association life member.

He says many people contributed to his successful career and life, naming first his beloved wife, Shirley. He also mentioned his elementary school teacher, Virginia Crosby, and his PhD dissertation adviser, Dr. William Leivo. Ken had special words of praise for John Divine, his high school physics and chemistry teacher and close friend, who was the first person he met at PHS.