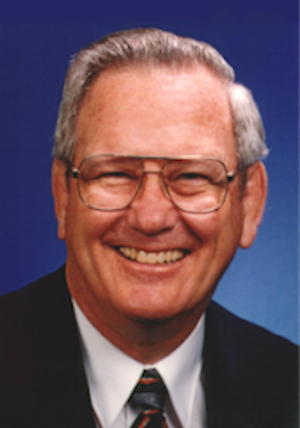 Ed Corr, a Perry student who grew up to represent the United States as an ambassador, moved with his parents and siblings to Perry in 1946 where he attended Perry Junior and Senior High School, graduating in 1952. His sister, Jean Anne and brothers, Bill and twin, Bert, also attended Perry schools. Their mother, Rowena, was a teacher, and their father, Bert, was Manager of the Borden Milk Plant. Ed was a member of the football and wrestling teams. He was in the Junior and Senior High School Honor Societies. Ed was elected president of the Student Council, was captain of Perry’s first state championship wrestling team and placed second at State, had roles in plays and held various class offices.

Edwin G. Corr was the U.S. Ambassador to Peru, Bolivia and EI Salvador, the Charge D’Affaires in Ecuador, and the Deputy Assistant Secretary of State for International Narcotics Control. As a career Foreign Service Officer he also served in Thailand and Mexico. He was a Peace Corps Director in Colombia and a program officer of the Inter-American Foundation (IAF) that worked with the “poorest of the poor” in Latin America. Ed was a USMC Infantry Officer with three and a half years of active duty.

Ambassador Corr resigned from the Foreign Service to become a Professor of Political Science at the University of Oklahoma (OU), holding the Henry Bellmon Chair in Public Service for eight years. He also was founder and director of the Energy Institute of the Americas (EIA) at OU, Associate Director of the International Programs Center (IPC), and a Senior Research Fellow of the IPC. He is the author, co-author and co-editor of five books and author of many book chapters and articles, and is the General Editor of the University of Oklahoma Press Series in International and Security Affairs. Ed is a paid consultant, evaluates development programs, serves on boards of nongovernmental organizations, lectures and conducts exercises for the U.S. Armed Forces and is a public speaker.

Ed has always considered Perry, the community that formed him, to be his home. This became official in 1980 when Mayor Charles F. Arnold proclaimed Ed “a lifetime honorary citizen of this community.” Since then that proclamation has hung on his office wall. After returning from the Foreign Service to Oklahoma, Ed served on the PHS Alumni Association’s Board from 1993-2009, and was Chair of the Honor Roll Committee 2005-2012. He and his wife, Suzann, of 56 years reside in Norman, OK. They have three daughters, three sons-in-law, and four grandchildren, all living in Norman.