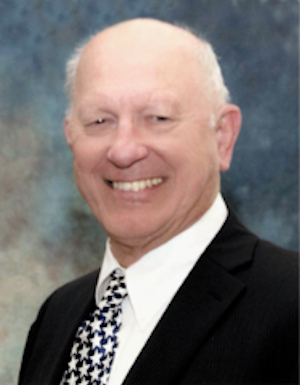 Alfred Ted Zavodny was born to Joe and Katie Zavodny on the family’s farm about 12 miles north of Perry. His education started in the one-room Pleasant Valley country schoolhouse. The next year, Pleasant Valley was merged into the Perry School District. Alfred then attended elementary, junior high and high school in Perry where he was active in numerous extracurricular activities, including wrestling, track, band, four years in the National Honor Society, Student Council, Boys State and Band President his Senior year.

Following graduation from PHS, Alfred enrolled at Northern Oklahoma College. He was recently named to the NOC Distinguished Alumni Hall of Fame, a list of approximately 30 honorees in the 112 year history of the college. Alfred matriculated to Oklahoma State University where he majored in Electrical Engineering. At graduation, he was named one of the Top Ten students in a class of 2500. While working full time in the Research and Development Division at Continental Oil in Ponca City he commuted nights and weekends to OSU getting his M.S. and Ph.D. degrees, majoring in Electromagnetic Field Theory.

Dr. Zavodny then taught mathematics at NOC for two scholastic years. From there he went into the Aerospace and Defense industry. While working for one of these highly classified Defense companies, he would disappear for 12 hours a day and then reappear to teach night-time computer classes full time for 6+ years at the Community College of Southern Nevada, where he was elevated to the rank of tenured professor. He is also lifetime certified to teach Mathematics in California Community Colleges.

The opportunity to join a team developing the first fully autonomous unmanned airplane lured Alfred to San Diego. It was the first, and largest, fully autonomous aircraft, that is, no pilot. He has been responsible for all radar, high-resolution cameras, and other sensors on a plane designed specifically to carry these devices worldwide at high altitudes for up to 30 hours at a time. Alfred was named Chief Scientist for the aircraft, and after 16+ years is still actively involved as Unmanned Systems Chief Sensor Technologist.

In looking back over his career, Alfred noted it included eight years in R&D for the oil industry, nine years teaching in community colleges, and 40 years developing technology for the Aerospace and Defense industries, and he is still looking forward to many more.

Alfred and his wife, Esther, live in the San Diego area. They have four children, all of whom have graduated from top-tier universities currently sharing four Master’s degrees and one Ph.D. Alfred gives credit for his success to his family’s support and a solid education he received in the Perry school system.