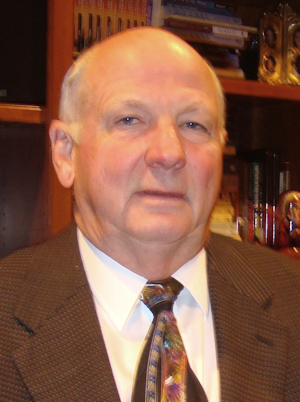 When you drive down the road and read a traffic sign, or when you use materials with adhesives, the chances are that Tom Chaffin developed some of chemicals that are a part of these items.

Tom Chaffin, a 1961 graduate, was quarterback of the football team and president of the National Honor Society while attending Perry High School. He received a BS in Chemistry from Oklahoma State University in 1965 and a PhD in Organic Chemistry from the University of Illinois in 1969.

Tom was employed by 3M Company in St Paul, Minnesota, for 35 years until retiring in 2005. He began his career as a Senior Research Chemist and held positions of increasing responsibility until he became Vice President and General Manager of the Traffic Safety Systems Division. During his career, he spent 10 years in international assignments in Japan, Denmark and Belgium.

In Japan, Tom served as the Technical Director for the largest 3M laboratory outside the U.S. corporate headquarters. While living in Copenhagen, Denmark, he was the Managing Director for the Danish 3M subsidiary. He then moved to the 3M European office in Belgium where he was Director for the 3M Traffic & Personal Safety European Subsidiary.

Since retiring from 3M, Tom and Barbara divide their time between St Paul, Minnesota, and Austin, Texas. He focuses his time on golf, his grandchildren and Bible Study Fellowship.