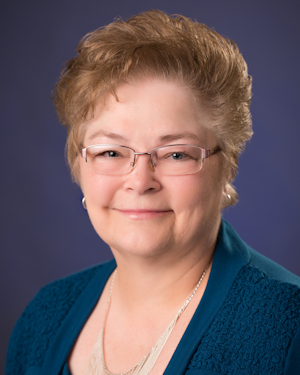 Cheryl DeJager, whose volunteer work has involved researching Perry history and creating websites for organizations, is a fourth-generation Noble Countian. Born to Morris and Dorothy (Grundeman) Bowers, she received her early education at Christ Lutheran School before transferring to Perry Public Schools in the 7th grade. During her high school years, she was a member of the National Honor Society, an Oklahoma All-State Band clarinetist and an Oklahoma Girls State delegate, as well as being active in numerous organizations.

While pursuing a BS in Accounting from Oklahoma State University, she was active in the accounting fraternity, Beta Alpha Psi, serving as an officer, and achieved recognition for academic achievement in both the business honor society, Beta Gamma Sigma, and Phi Kappa Phi.

In 1973, after her college graduation, she and William DeJager were married. They lived in Orange County, California, for five years where she worked as an accountant before they returned to Perry.

Having worked at the Exchange Bank during the summers while attending college, Cheryl returned to the bank as its internal auditor. In 1982, she became a Certified Public Accountant and opened her own accounting practice in Perry. After seven years in public practice, she took a position as a computer programmer/business analyst for Charles Machine Works where she worked for the next 14 years. During that time, she developed a deep interest in web development.

She was a member of the Technology Committee, a group consisting of schoolteachers, business technology professionals and community members to provide guidance for the schools’ technology needs and to raise money to purchase computers for the classroom. Cheryl assisted the Perry High School web development class by teaching HTML and helped local organizations get their websites up and running. In 2005, Cheryl accepted the position as portal specialist for Xavier University in Cincinnati, Ohio. She worked remotely from her home office for the next seven years while developing websites for local organizations and businesses.

Cheryl has been an avid volunteer both in her professional and personal life. Locally, she served as treasurer for the Perry Business Women’s organization and statewide as chairperson of the Membership Committee of the Oklahoma Society of Certified Public Accountants. Having a keen interest in the Perry band program from her days in the band, she served as treasurer for the PHS Band Boosters for eight years. She developed and has maintained the Cherokee Strip Museum website for almost 20 years. During that time what began as a passion for the study of early Perry schools grew into a love of Perry’s history and its families. She worked on the Perry Main Street committee to have the buildings on Perry’s downtown square listed on the National Register of Historic Buildings and designed a “Virtual Walk Around the Square” for the Perry Main Street website. Currently, Cheryl and the Perry Main Street Economic Restructuring Committee are researching the history of the downtown businesses. When this is complete, the history of each building will be an added feature of the “Virtual Walk.”

As an active member of the Noble County Genealogy Society, Cheryl serves as Vice President and devotes many hours digitizing local history resources and helping genealogists discover their Noble County roots. She found that photographs are one of the best historical resources and has a collection of hundreds of antique Perry postcards.

Cheryl first became involved with the PHS Alumni Association because of her research into the history of the Perry School System. Since that time, she has become a member of the Board of Directors, serving as treasurer and being responsible for the computerized records.

William and Cheryl are the parents of two sons, both graduates of PHS. Wade and his wife, Amanda, live in Norman, Oklahoma and Michael lives in New York City.