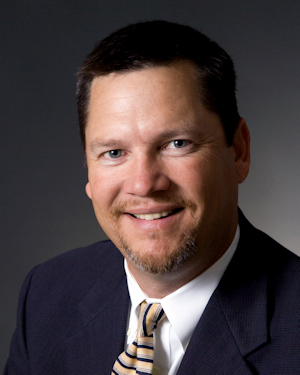 Charles R. (Chuck) Hall is a fourth-generation descendant of a pioneer family, settling near Perry during the Cherokee Strip Land Run. The son of George W. Hall and Juana B. Hall and the grandson of Perry natives Ora Richard and Matilda (Ringler) Hall, Chuck is most proud of being the third generation of a banking family legacy that spans more than 140 years.

After PHS graduation in 1985, Chuck attended Northern Oklahoma College and East Central University as a member of the collegiate golf team. He then joined the Oklahoma Bankers Association as a registered lobbyist and as the Director of Government Relations where he drafted, lobbied and successfully passed among others – two landmark pieces of Oklahoma banking law including Oklahoma’s Interstate Bank Branching Act and the state’s De Novo Bank Branching Act. Additionally, he created and chaired the Banking Leadership Oklahoma Committee (BLOK) designed to develop, educate and create network opportunities for future Oklahoma bank managers and executives.

Returning to Perry in 1994, Chuck joined the board of directors for the Exchange Bank & Trust Company and its parent – Perry Bancshares Inc. By 2000 he was elected to serve as chairman of both boards and in 2008 became the chief executive officer – positions he holds to this date. Under his supervision, the bank has experienced remarkable growth without sacrificing the sound banking principles that are rooted in Chuck’s heritage. In 2009, the bank opened its second facility in Stillwater, Oklahoma. In 2012 the American Bankers Association nationally recognized the Exchange Bank as one of this country’s “Top 100 Performing Community Banks.”

Married to Amy Wilkinson Hall, the couple have three daughters (Ashley Hall-Moore, Sydney R. Hall and Riley L. Hall) and one granddaughter. In his spare time, Chuck enjoys foreign missions and has taken multiple trips to Niamey, Niger, West Africa, and Port-au-Prince, Haiti. Recently, he has been invited to consult for Water4, an Oklahoma-based nonprofit organization that was created to establish sustainable water sources in third-world countries. He still enjoys frequent rounds of golf and is an accomplished team roper and an avid fisherman. The family regularly attends the LifeChurch Stillwater Campus.