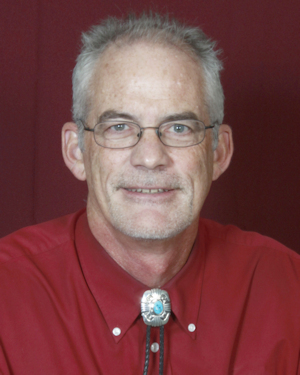 Dr. Kenneth J. Martin is Regents Professor of Finance and Department Head of the Finance Department in the College of Business at New Mexico State University. Ken, son of Dr. Charles and Marjorie Martin, was born and raised in Perry. He did all of his primary and secondary schooling in Perry graduating from Perry High School in 1973. He then began his academic career at Northern Oklahoma College in Tonkawa where he played basketball for the Mavericks for two years and graduated with his associate’s degree in Business in 1975. He then went on to Oklahoma State University majoring in Accounting. Upon graduation in 1977, he went to work as an accountant at Koch Industries in Wichita, Kansas. Hearing the call of the classroom, he went back to school earning his Master of Business Administration from Oklahoma State in 1980. He worked for Stroud Crop Insurance in Weatherford, Oklahoma, and also taught at Southwestern Oklahoma State University from 1980 to 1983. He then left to pursue a doctorate in Finance at Purdue University, which he completed in 1987. While at Purdue he met and married Mary Clikeman in 1986. He and Mary have four children, Ben, age 25, Meredith, age 23, Jonathan, age 20, all of Albuquerque, NM, and Peter, age 12, living in the home.

Dr. Martin began his academic professional career at the University of Iowa in 1987 and taught there until 1995 when he and his family moved to Las Cruces, New Mexico, so that he could take an appointment on the faculty at New Mexico State University. In his career, Dr. Martin has published 20 articles in academic journals and made numerous presentations at conferences including the International Conference on Technology and Business in Dubai, UAE, in March 2014. He regularly teaches courses in financial information technology, equity asset valuation, and corporate finance. He is the supervising professor for the Wetherbe student-managed investment fund of approximately $120,000. The fund has returned 5.69% annually over the period from 2007 to 2014, a period that includes the devastating financial crisis and bear market of 2008-09. In 2006, he was named a Regents Professor, a chaired professorship established by the Board of Regents of New Mexico State. In 2012, he was named New Mexico’s Professor of the Year by the Carnegie Foundation for the Advancement of Teaching and was also named a Distinguished Achievement Professor by New Mexico State University. In 2014, he was named to be Department Head of the Finance Department.

Ken has also been active in community and church activities. He is a member of Faith Lutheran Church and has served as President and Treasurer of the congregation. For 17 years, he served as Cubmaster of Cub Scout Pack 5 and in 2001 earned his Wood Badge, the highest level of training for volunteer leaders in the Boy Scouts of America. He is currently an Assistant Scoutmaster for Boy Scout Troop 66. He is also a member of the Las Cruces Rio Grande Rotary Club and serves as the Youth Exchange Officer. In 2013, his family hosted Paul Villain, a foreign exchange student from the Normandy region of France, and is looking forward to hosting Dirlei Neto from Brazil in the fall semester of 2014.