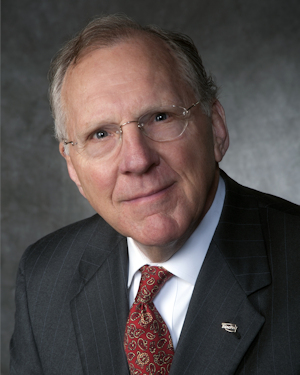 Dennis Brand, banker, volunteer, and former collegiate wrestler, is a 1966 graduate of PHS and a lifetime member of the Perry High School Alumni Association, Inc. Wrestling just four years for Perry, he was a state champion and outstanding wrestler his freshman year and a two-time state runner-up, winning the state tournament his senior year at 147 pounds.

Dennis attended the University of Oklahoma on a wrestling scholarship. He lettered all four years and won the Big Eight tournament his senior year at 158 pounds.

After a brief career in Norman with a homebuilding company, Dennis joined Bank of Oklahoma in 1972, entering the management training program, and was later assigned to the commercial real estate division. He advanced several times, eventually managing numerous departments as Executive Vice President and director of the bank and bank holding company. In 1992 Dennis joined BancFirst as its president of the Shawnee market. In 1999 he was promoted to Director of Community Banking, serving in that position until 2003 at which time he was promoted to Chief Operating Officer. In 2005 he was named Chief Executive Officer.

Dennis serves on the board of directors of BancFirst, BancFirst Corporation, BancFirst Insurance Services, Inc., and Midwest Equity Group. He was appointed by Governor Mary Fallin to serve on the Oklahoma State Banking Department board.

Community service activities include serving on the Jim Thorpe Association Board of Directors from 2010 to present, Regional Food Bank Foundation as a board member and treasurer from 2010 to 2014, Regional Food Bank Investment Committee from 2014 to present, Saint Gregory’s University Board of Trustees from 1994 to 2008 and Chairman of the Board of Trustees from 2003 to 2008, Oklahoma Community Institute Board of Directors from 2002 to 2004, Pottawatomie County United Way Drive Chairman in 1996, Boy Scouts of America District Development Drive Chairman, Shawnee Chamber of Commerce Chairman and board member and Chairman of Downtown Tulsa Unlimited.

Brand was recognized in 1996 by the national United Way organization, receiving the Mary M. Gates National Achievement Award for his leadership and success of the Pottawatomie County United Way campaign. In 2011 he was inducted into the Oklahoma Chapter of the National Wrestling Hall of Fame as an Outstanding American, in recognition of his achievements outside the sport of wrestling.

Dennis and the former Carla Hamm have been married 47 years and have three children and five grandchildren. He is the son of Ester Brand and the late Herb Brand.