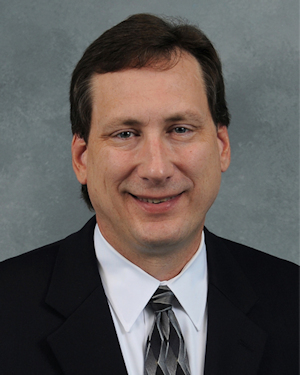 Darren Jerome is the manager of the Federal Aviation Administration, Radar Product Division. Son of Lyle and Norma Jerome, he graduated from Perry High School in 1983 and Oklahoma State University in 1988 with a bachelor’s degree in Electronics Engineering.

His career with the FAA began straight out of college with a position as a radar systems engineer. Working his way up to senior radar systems engineer, he successfully managed systems providing critical aircraft surveillance data to air traffic control for safe flight throughout the country.

Darren’s first management position began in 2001 with his placement over all terminal radars and, four years later, he was named assistant division manager over all radar. He continued to work in various levels of management in support of radar programs, computer automation systems, communication systems, and business management until his selection as the Radar Product Division manager in 2009.

The Radar Product Division provides 24/7 support for radar parts and services necessary for the safe and effective operation of more than 900 National Airspace System, Department of Defense, Weather and Advisory Radar systems. The Division also contains the Agency’s only antenna test range facility and on-site operations group, which provides scheduled and emergency maintenance in response to various situations such as typhoons, tornadoes and hurricanes. The on-site operations team also manages the Agency’s airport equipment shelter program and an extensive maintenance and restoration program for more than 3,000 Department of Homeland Security surveillance and communication towers used by the Customs and Border Protection in protecting the United States’ northern and southern borders.

As the manager of the Radar Product Division, Darren manages $38 million annually in supply chain activities and Maintenance, Repair and Overhaul for the Agency’s Radar parts program. The Agency’s on-site operations program has grown from $3 million in 2001 to $34 million today and provides jobs to more than 150 government employees and 70 contractors.

In 2013, Darren became a graduate of the Federal Executive Institute (FEI) Office of Management and Budget’s Leadership for a Democratic Society. By providing integrated logistics support for NextGen Air Traffic Control systems, Darren is also playing a key role in the Agency’s evolution into the future of air traffic control modernization.

Darren and his wife, Barbara, live in Norman, Oklahoma, and are members of Journey Church. They have two daughters and one stepdaughter, Ashlea Barber, Aubrie Howell and Trena Settle, and two stepsons, Bryan and Mathew McCauley, and six grandchildren.