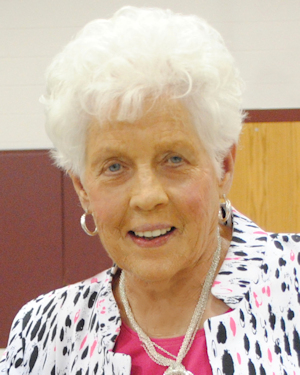 Delores Brown Mitchell graduated from Perry High School in 1952. After graduation, Delores married Kenneth Mitchell, and was married fifty-eight years until his death in 2010. They are the parents of Kimberly Sinclair, Kenna Buffington, and Bruce Mitchell. Delores has dedicated her life to her children, three grandchildren, and three great-grandchildren.

Delores worked many years at The Charles Machine Works, Inc. as secretary to Leroy Rolling, and continued working there another five years after Leroy’s retirement in 1988.

In 2002 Delores assisted in the planning of the 100th anniversary of the Perry High School event, and was mentioned by Fred Beers in his Northwest Corner column of the Perry Daily Journal.

Delores is the volunteer who would open the alumni building during the week of the Cherokee Strip celebration. She is fondly known as the “hostess” when early birds drop in for coffee at 7 a.m. and hundreds of alumni come in to sign up and pay their dues. Delores is the first person to arrive and the last one to leave when the alumni building doors are open. Delores is a treasure trove of alumni history and her 27 years of service to PHS alumni is greatly appreciated.

Delores has served the Perry community over the years, being active in the First Baptist Church of Perry, Farm Bureau, Cowtown Twirlers Square Dancing Club, and her children’s, grandchildren’s, and great-grandchildren’s school activities.

We appreciate all Delores has accomplished for the Perry High School Alumni Association!