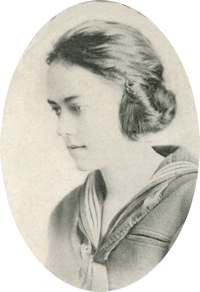 “Her only fault is that she has no faults.”

Graveside rites will be at 11 a.m. Friday at Grace Hill cemetery. Rev. Monty Baggett, associate minister of the First Baptist church of Ardmore, will officiate. Memorials may be made to the Madill Baptist Village, Route 3, Box 101, Madill, OK, 73446.

Mrs. Brand was born Oct. 16, 1902, at Perry, the daughter of John H. and Catherine A. (Richardson) Scott, who were pioneers of the Cherokee Strip Run.

She and Robert Erie Hughes were married at Perry on May 18, 1924. Hughes died in July 1958. Six years later, she and Edgar A. Brand were married at Woodward. Brand preceded his wife in death in August 1969.

Mrs. Brand had lived in Perry, Marshall, Enid and Woodward until 1985, when she moved to the Madill Baptist Village. She moved to Ardmore two years ago. Mrs. Brand was a member of the First Baptist church of Madill.

In addition to her first and second husbands, Mrs. Brand was preceded in death by one son, Robert Scott Hughes, in 1975.