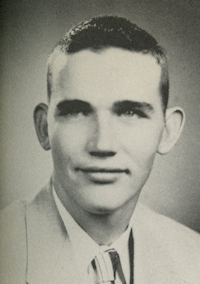 Funeral mass will be held at 10:30 a.m. Saturday, Nov. 18, 2000, at St. Rose of Lima Catholic Church. Rev. Kevin Devlin will officiate. A wake will be held at 7 p.m. Friday, Nov. 17, in the Brown-Sisson Funeral Home chapel. Interment will be at the St. Rose of Lima Catholic Cemetery under the direction of Brown-Sisson Funeral Home. Memorials may be made to the Oklahoma Medical Research Foundation.

Edwards was born March 11, 1939, in Perry, the son of Glen A. and Mary Esther (Denery) Edwards. He and the former Joann Pricer were married Sept. 29, 1956, in Perry. He had been self-employed in a heating and air-conditioning service and worked for the past five years at The Charles Machine Works. Inc. Subsite location.

He was a member of the Catholic church.

He was preceded in death by his parents; one son, Bobby Wayne; and one brother, Kenneth Wayne.