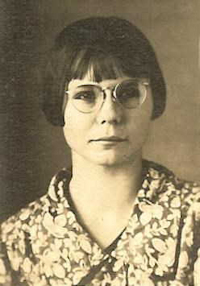 Elizabeth has attended Noble county schools in Pleasant Valley and Muskogee. The last four years of her schooling has been at Perry high school.

She plans to work at a housekeeping job in the country after she graduates.

She was the daughter of Elmer and Lizzie Hicks and was born north of Perry. A resident of Bartlesville since the 1940s, she had been employed at Smith and Barney.