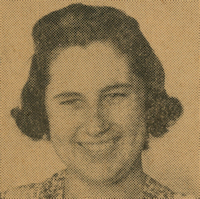 ﻿- 17 year old daughter of Mr. and Mrs. Charles Malzahn and lives at 900 Grove street. She was born February 1, 1923, in Perry and has attended Perry schools.

In 1938-39 she was secretary of the student council; secretary of Rainbow and this year was secretary of the band. Her hobbies include piano and expression. For twelve years she has been neither absent nor tardy, thus receiving a twelve-year perfect attendance record. She lettered in band and in 1939-40 played the saxophone at the Tri-State band festival in Enid.

She plans to attend college somewhere next year and study dietetics but is undecided as to where she will go.

Virginia was a proven professional. Her dedication to home economics was evident to all who associated with her over the years. She has willingly and capably devoted her life to her family and her profession.

A native of Perry, Oklahoma, Virginia Malzahn Lamb lived in Oklahoma all of her life and for the past 26 years had lived in Edmond. She is the mother of two sons who both have master’s degrees from Central State University and reside in Edmond with their families. She was an active member of the First Presbyterian Church of Edmond and taught Sunday School classes for a number of years.

After her retirement from Central State University, Virginia became involved in a full-time career as technical adviser and assistant manager for The Greystone Restaurant, a fine dining establishment in Edmond, owned by George Lamb, her son.

Survivors include George and Charles Lamb, both of Edmond. Also surviving is her brother, Gus Edwin Malzahn of Perry; and 3 grandchildren, Kelley and Erik Lamb and Charles Dean Wade II.

Since 1978, Virginia has been involved with the Family Life Curriculum Development program in high school, middle school, and elementary school levels in the Oklahoma City Public Schools. At the high school and middle school levels, she functioned as a consultant and a member of the advisory committee. At the elementary school level, she not only served on the advisory committee and as a consultant, but also conducted an in-service program annually for the implementation of curriculum units.

During 1973, Virginia chaired a committee for the Oklahoma City-County Health Department to develop a curriculum for a sanitation certification program to be taught to food service managers and supervisors. She also assisted with the development of the Food Service Sanitation Certification Examination, which is required by an Oklahoma City ordinance for management personnel of every food service establishment in Oklahoma City.

In 1984, Virginia served on an ad hoc committee with the Food and Drug Administration in Washington, D. C. The purpose of this committee was to determine testing standards for a National Standardized Food Protection Certification Program. In 1984-85, she was a test item developer for the National Food Protection Certification Tests developed by Educational Testing Services, meeting several times in Princeton, New Jersey.

Virginia was working with the Culinary Society of Oklahoma as a consultant and educator in the Chefs Certification Program.

Virginia Lamb was an associate professor and chairman of the Home Economics Department at Central State University, Edmond, a position that she held nine years before retiring in May 1986. In addition to her responsibilities as chairman of the department, she was the adviser for the specialized area of Food Management and Nutrition and coordinator of CSU’s Dietetic Program, and she taught undergraduate and graduate courses.

In 1980, Virginia assisted with the implementation of the Home Economics Professional Services Master of Science degree at Central State University. In 1983, she was responsible for CSU’s Home Economics Department receiving Plan IV Certification from the American Dietetics Association. In May 1984, she was the founder of the Gamma Chapter of the Phi Epsilon Omicron, a national home economics honor society, at CSU.

As a member of the CSU faculty in the College of Special Arts and Sciences, Virginia represented the college on many university committees, including a four-year term on the CSU Graduate Council, three terms on the CSU Honor committee, and membership on the CSU 1984-85 North Central Accreditation Association Steering Committee.

From 1966 to 1971 and 1973 to 1975, Virginia served as Consultant of Home Economics for Oklahoma City Public Schools. During 1972, she served as curriculum specialist for the State Department of Vocational and Technical Education. She spent two years as Director of Vocational Education for Oklahoma City Public Schools before going to Central State University.

During the summers from 1973 to 1978, Virginia was a visiting professor on the campuses of Northern Arizona State University, Flagstaff, Arizona, and Mankato State College, Mankato, Minnesota.

In 1973, Virginia received a grant from the U.S. Office of Education and the U.S. Department of Health, Education, and Welfare through the Oklahoma State Department of Vocational and Technical Education to do a research project entitled, “Home Economics Career Exploration Project for Seventh and/or Eighth Grade Students in Oklahoma City Middle Schools.” Her doctoral dissertation, written in 1972, researched “Interrelating Selected Aspects of Home Economics and Physical Education for a Health Program in the Middle Schools at the Sixth Grade Level.” Other publication include “Inventory Property Protection Program,” 1983; “Commercial Food-Management and Production,” 1971, written for the Oklahoma State Department of Vocational and Technical Education; and articles for Oklahoma Living magazine.

In addition to membership in the Oklahoma and American Home Economics Associations, Virginia was a member of the Oklahoma Association of Supervision and Curriculum Development; she also served on its Board of Directors. She held membership in and served on the Board of Directors of the Oklahoma Restaurant Association. Other professional memberships include Delta Kappa Gamma; Home Economists in Business; Omicron Nu; Phi Upsilon Omicron; Phi Delta Kappa; National Council of Administrators of Home Economics; Oklahoma and American Dietetics Associations; National Restaurant Association; Culinary Society of Oklahoma; CSU University Dames; Edmond Chamber of Commerce; and Edmond Business and Professional Women, which she served as president.

Virginia Lamb, a caring, competent home economist, has been a person to lean on, has offered a shoulder to cry on, and provided encouraging support when students or friends or co-workers met with moments of dejection and despair. Albert Schweitzer said, “Sometime our light goes out but is blown again into a flame by an encounter with another human being. Each of us owes the deepest thanks to those who have rekindled this inner light.” Fortunate is the individual who has encountered Virginia Lamb, a home economist.