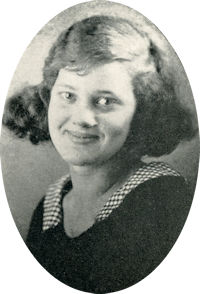 Mrs. Thompson was born at Perry, Dec. 22, 1905, the daughter of Chris D. and Lula L. Jensen, early settlers in the area. She was a graduate of Perry high school and worked for her father at the First National Bank of Perry.

She later was employed at the First National Bank of Oklahoma City. Mrs. Thompson moved to Shawnee in 1962 and was involved in several enterprises there until her death.

In addition to her parents and husband, George L. Thompson, she was preceded in death by one daughter, Elaine Kidder; two brothers, Frank and Charles Jensen; and three sisters, Martha H. Jensen, Maud Kathryn Walderman and Dorthea E. Donnelly.

Funeral was Thursday in the chapel of Gaskill Funeral home with burial at Grace Hill.